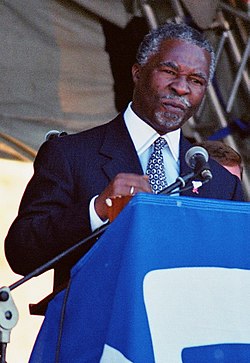 Thabo Mbeki (1942–) is a South African politician who served as the second President of post-apartheid South Africa after Nelson Mandela. During his time in office, he became one of the world's most powerful critics of the scientific consensus that HIV causes AIDS. His administration appointed denialists to serve in government positions as consultants and on academic advisory panels. His health ministry adopted policies denying AIDS patients access to anti-retroviral drugs that Mbeki described as "poisons".[1] Instead, his appointed health minister promoted the use of herbal medicine to treat AIDS.

Predictably, in a country where one out of every six adults is HIV-positive,[2] Mbeki's policies had catastrophic effects, leading to the preventable deaths of possibly hundreds of thousands of people from AIDS.[3][4]

This denialism-related article is a stub.
You can help RationalWiki by expanding it.
Retrieved from "https://rationalwiki.org/w/index.php?title=Thabo_Mbeki&oldid=2458831"
Categories:
Hidden categories: