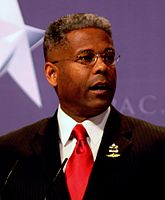 Allen West has a higher security clearance than you, so shut up!

Col. Allen West (1961–) is an American retired Lieutenant Colonel and the former Republican Representative from Florida's 22nd district. He is also a batshit crazy Teabagger and a raging islamophobe who is most often invoked by 'baggers to handwave any accusations of racism in the movement, which, according to West, is an invention of the liberal media. He was elected in the 'bagger wave of 2010, being the first black Congressman from Florida since the 19th century (which proves 'baggers are definitely not racist). He was defeated in his 2012 reelection bid and is currently making his career as a second-rate pundit in an effort to stay relevant.

West served in the first Gulf War as well as Dubya's War in Iraq. His decorations include the Bronze Star and the Meritorious Service Medal. West was touted as a war hero during his campaign for an incident that occurred in the second Iraq War.

In 2003, West's unit picked up an Iraqi detainee. West restrained the detainee and fired a bullet near his head, causing the detainee to give up "essential" information that led to the arrest of another Iraqi insurgent involved in a bomb plot. Glenn Beck did a show memorializing West's excellent service to the nation, calling him "a man of integrity." Though he forgot to play some clips of Jack Bauer interrogations this time around. Nevertheless, West is remembered as one of the great heroes of the Iraq War and an example of a true American, a role model for us all.

For those not living in an alternate universe[edit]

Beck failed to mention the rest of the story. West allowed four of his troops to beat the detainee senseless. The "tip" the detainee gave West did lead to the arrest of another Iraqi (supposedly) involved in a bomb plot...except no evidence was found that the second detainee was guilty of anything at all. West was found in violation of the Uniform Code of Military Justice, relieved of his post, and fined $5,000. He subsequently retired.[2][3]

West has ties with a gang called the Outlaws Motorcycle Club. He has given speeches at events organized by affiliates of the "club" and used "club" members as personal guards on one occasion. Many of the "club's" former members have been convicted of violent crimes, attempted murder, and racketeering.[4] West also has a paper trail of unpaid debts and an IRS lien has been placed on him.[5]

West's 2010 campaign attracted the attention of wingnuts and the morbidly curious across the nation. He received the Sarah Palin stamp of approval early in the campaign season, greatly helping his chances in the primary. West no doubt relied on the crazification factor of his district's voters to bullshit his way through the 2010 campaign, as his checkered past came back to bite him in the ass multiple times:

Apparently, these "gaffes" weren't a liability to West's first campaign, as he took out incumbent Ron Klein by a fairly wide margin. Shortly after the election, Kaufman resigned due to butthurt over the "liberal media's' "attacks" on her and the "electronic lynching" she was receiving on the internets. West accused the media of racism and sexism in their "attack" on Kaufman, defending her as a "brilliant political mind."[13]

So far, West's political achievements consist of being a keynote speaker at CPAC 2011. After he lost his seat in the 2012 general election to newcomer Patrick Murphy, he had a simple explanation. It wasn't that he ever came off as a crazy person due to his previous track record, of course: he was cheated out of it.[14] Judging by the length of time it took him to finally concede, he may actually believe it.[15] Furthermore, other terminally strange members of the House (including the likes of Paul Broun and Louie Gohmert) endorsed him for Speaker despite the fact that he no longer held a seat.[16]

West has continued to remain busy after leaving Congress. He currently hosts his own podcast, called The Old School Patriot, and is a regular contributor for Fox News. He's also a columnist/pundit-for-hire for various right-wing websites, including Townhall.com, RedState, National Review Online, and CNSNews.com, among others. He mostly spends his time whining about how the "Progressive Socialist Left" (the man can barely go five seconds without saying those exact words) is supposedly destroying society as we know it. He is also active as a public speaker and is a frequent guest on conservative talk radio shows.

West is currently a board member and prominent spokesman of the National Rifle Association. He also served as the Executive Director of the National Center for Policy Analysis, a think tank based in Dallas, Texas, from 2016 until it ceased operations in 2017.

West is a strong supporter of Donald Trump. Shortly after Trump's election victory, West met with him and his transition team at Trump Tower several times, and it was rumored that Trump was considering giving West a role within his administration, possibly as a national security advisor. West himself expressed enthusiasm for possibly serving in the Trump Administration.[17] Ultimately West did not get an official position in the administration, but he informally advised Trump on a few occasions since then and is one of his most prominent defenders.

In 2021, West announced that he would be running for Texas governor in the 2022 race,[18] apparently because the current Republican governor (Greg Abbott) isn't Trumpy enough. West had criticized Abbott in 2020 for using "executive orders, mandates, decrees, and edicts" during the COVID pandemic rather than first getting legislative approval.[19] West, who was unvaccinated, came down with COVID in October 2021 and was taking unapproved hydroxychloroquine and ivermectin for it.[20]

He apparently blames football injuries on the separation of church and state, instead of the more obvious cause of actually playing football.[21]