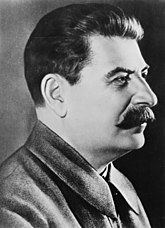 Joseph Vissarionovich Stalin (18 December 1878 – 5 March 1953), born Iosif Vissarionovich Dzhugashvili,[2] was an ethnic Georgian revolutionary who schemed and murdered his way to the leadership of the Soviet Union, an entity that he helped to establish with other leading Bolsheviks. He is known for mass starvation and genocide, brutal totalitarianism, his personality cult which lasts to this day, and bringing the Soviet Union into the industrial age kicking and screaming. He was also forced to join the winning side of World War Two, and he capitalized on this victory by creating the Eastern Bloc and helping to start the Cold War.