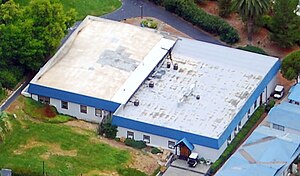 The black bluish-white hole of California

The Hole is a Gulag "correctional facility" for higher ranking COS officials who just so happen to incur the ire of the Church's current leader, the distinctly unpleasant Miscarriage David Miscavige. Of course, the Church denies its existence and states nobody has been held against their will.

Origins of the Hole, or musical chairs of Doom[edit]

The Hole began its life[1] as an office for the Church's international management team on the Riverside County, California — located "Gold Base", being merely a pair of double wide trailers.

Relationships between higher ups at the church had become very frayed in nature with Miscavige often psychologically abusing the others and belittling them in rants during executive meetings. This came to a head in the fall of 2004, with Miscavige calling 70 senior executives to the double wide trailers and ordering them to play musical chairs in the conference room. We shit you not.

Those who failed to get a chair were offloaded to the more unpleasant parts of Scientology's little empire, until the end of the contest. Miscavige, being the manipulative little bastard he was, told the executives to stay in the room and sleep under the tables until further notice.

According to Janet Reitman,[2] a purge was later carried out at Gold Base with those "offloaded" being presented with the infamous Freeloader bills. Meanwhile, the executives were forced to perform the "A to E" steps in that they were to identify which of them was "defying Miscavige and sabotaging Scientology with their incompetence".

Conditions within and without the Hole[edit]

According to Mike Rinder,[3] those within the Hole slept in rather cramped conditions. Men would sleep around the conference table, with women sleeping in the cubicles and the small offices within the trailers.

The Hole was said to be infested with ants,[4] with the air conditioning occasionally being turned off along with the electricity. Showers were scheduled for times when the occupants would be less likely to encounter Miscavige, with this later being "upgraded" to being able to visit the garage.

Those within the hole were made to undergo the aforementioned "A to E", which was in essence a star chamber for Miscavige. Sometimes, he directed these "group confessions"; more often, this would mean being put in a trash can and being forced to admit various crimes (including "homosexual tendencies") by your fellow inmates.[5]