They missed the golden opportunity of plastering a goat on the logo though.

fundamentalist Christian cult church, founded in 1913 and registered by Felix Y. Manalo in 1914 as a unipersonal religious corporation to the United States administration of the Philippines.

The church describes itself as that "one true church" and the restoration of what Jesus originally established; all other sects are considered by the INC as apostate. It is well known in its native country for, among other things, bloc voting, its operation as a business enterprise[1] and their aversion to eating pork blood stew

Felix Y. Manalo, INC's founder, was born Roman Catholic, but later dabbled with other religious denominations after becoming disenchanted with Catholic theology in his teens. The Philippine Independent Church

attracted him at first but it did not pique his interest as it is essentially a Catholic offshoot anyway (albeit with more Filipino nationalist fervour than subservience to the Vatican). Manalo tried out being a Methodist and later a Seventh-day Adventist but he got kicked out of both sects over doctrinal arguments, at some point even hanging out with atheists and freethinkers.[3] After secluding himself with religious literature, Manalo and his wife started preaching their newfound beliefs, eventually expanding to thousands of members and several parishes across the Philippines over the years.

The church further expanded their reach even outside their native Philippines, with a church in Ewa Beach, Honolulu, Hawaii serving as the first INC mission in the United States. Several missions in various countries around the world and entrepreneurial ventures later, the INC celebrated their 100th anniversary in 2014 with the construction of the Philippine Arena,

a mixed-use indoor theatre that also serves as their flagship megachurch of sorts.[4][5]

A cheap knock-off of the Italian tricolore.

The INC holds it that they are the "true church" established by Jesus in the 1st century CE, further opining that its origins in the Philippines are a fulfillment of an end times prophecy.[6] It also holds that the Bible is the sole authorative literature to which they form the basis for their faith.[7] Their nontrinitarian belief rejects the concept of the Holy Trinity, scoffing off the latter as heresy.[3]

Manalo is revered by his adherents as the "angel from the East" mentioned in Revelation 7:1-3, and Christ's "last messenger". As such, he and his successors cultivate a personality cult that its ministers and laypeople hold so dearly at the pain of shunning, excommunication, or worse.[8] The church also teaches its members that there is no salvation outside their church, much to the exclusion of other sects as one can guess.

As one could imagine, the INC's status and influence it enjoys especially in its native Philippines became the subject of much scrutiny and derision both from religious and secular groups.

Besides running a number of business ventures such as an educational institution and a broadcast network among other things, it has also been implicated in numerous criminal activities and incidents, namely allegations of assassinations of members whom they see as having known too much,[9][10] money laundering

from donations taken off their congregations, as well as coercive and exploitative control over their parishioners' lives.[8][11][12][13] Ramon Tulfo, brother of journalist and YouTuber Raffy Tulfo, likened the church to the Mafia due to perceived similarities with how both groups are run, their influence in society and the government and how they silence critics.[14] Such is their determination to get a stranglehold in Philippine politics that they have been implicated in plots for them to maintain their influence, such as in 2001 when a military contingent surrounded the INC compound, angering Eraño Manalo, son of Felix Manalo and the second executive minister of the church. Military intelligence also alleges that the church has its own armoury of 1,000-2,000 high-powered firearms and what appears to be a paramilitary of loyal members willing to kill and/or maim for the sect, some of them being police officers and soldiers. Some of their members also reportedly shot and killed three Marines who were under Ferdinand Marcos's orders to shut down the church's DZEC radio tower.[11]

Blessed are those who vote as we say[edit] 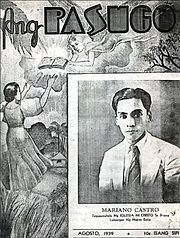 Brainwashing the masses since the early 20th century.

One peculiar aspect about the INC is its policy of bloc-voting, where they announce a list of politicians that they endorse to their fellowship. While their stated reason for this key tenet is to foster "solidarity" amongst the whole church, in practice this is used by shrewd politicians to gain a significant advantage especially in jurisdictions where the INC maintains a sizeable presence regardless of whether the politicians being endorsed are of sound moral character (or otherwise). Their influence cemented their reputation as kingmakers in the Philippines due to how they are able to herd their adherents to mindlessly vote for the people their elders have imposed onto them,[15] further blurring the lines of an already muddy separation of church and state in the country which the local Roman Catholic church also has some control over.[12] This reputation has seen at least some decline in recent years however, as reports of members defying church orders have emerged in 2022 over disillusionment with the church's endorsement of certain candidates whose credentials and morality are questionable at best.[note 1][16][17]

A typical low-poly model of an INC temple.

Another interesting fact about the INC is its long-running feud with a splinter sect called the Members Church of God International, known colloquially through its radio programme Ang Dating Daan

(English: The Old Path), whose founders were ex-INC members who defected from the church in the 1920s. The Old Path, whose foul-mouthed minister Eliseo Soriano started the aforementioned program to propagate his teachings, intensified its beefing with the INC starting in the 1980s where the late Soriano "exposed" the supposed lies and "wrong doctrines" by other sects, the INC included. The latter remained reticent until they directly responded with Ang Tamang Daan (English: The Right Path) who rebuked not only The Old Path's supposed misleading doctrines but also of other religions as well.

As if their long-standing beef wasn't enough, a brawl ensued between MCGI and INC members in Apalit, Pampanga which spurred from a debate at a local Jollibee

branch.[18] Also of note is that both groups have tried to outdo each other when it comes to their business interests, with the INC having its own media arm complete with a network running secular programming, and the MCGI responding in kind through affiliated broadcast networks such as the radio network Wish 107.5

A highly-publicised schism occurred in 2015 when high-ranking members of the group were excommunicated, namely Felix Nathaniel "Angel" Manalo and Cristina "Tenny" Villanueva Manalo, the brother and mother of current Executive Minister Eduardo Manalo, respectively. Officially, said members were expelled due to "sowing disunity", but Angel and Tenny claimed their lives were threatened by the Iglesia administration, and were reportedly illegally detained at the church's central office complex in Quezon City. Several other members involved in the schism have also been allegedly abducted.[19]

Former INC ministers Roel Rosal and Isaias Samson, Jr. alleged a major cover-up involving chief auditor, Glicerio "Jun" Santos, Jr. concerning corruption within the church. An evangelical worker named Lowell Menorca was also detained by the group, stating he was forcibly detained and kidnapped at gunpoint by Philippine National Police officers under the INC's payroll.[20] Menorca later fled to Canada where he was able to apply for asylum on the grounds of persecution,[21] with the Immigration and Refugee Board of Canada

stating: "When the panel considers the links between the INC and the law enforcement authorities in the Philippines, the general climate of impunity that pervades Philippines law enforcement, particularly with respect to the issue of extrajudicial killing, and the level of corruption that exists in the Philippines government and law enforcement apparatus, the panel is satisfied Menorca would be unable to avail himself of state protection, from the risks that he fears in that country…"[22] Despite investigations concerning the INC's dealings and anomalies, the National Bureau of Investigation (NBI) dismissed the abduction case on grounds of having insufficient evidence.[23] The ensuing controversy sparked questions about the country's separation between church and state, which has already been defied by the group as mentioned in the previous section.

Perhaps even more disturbing are the allegations of assassinations

carried out against members who express dissent or whistleblowers who expose the church's secrets, particularly that of Jose Norulito Fruto who previously made statements criticising the INC hierarchy. Fruto was shot dead by an unidentified hitman while on a highway in Cavite,

allegedly on INC's orders. Menorca eulogised his slain comrade as "one of the bravest people" he knew, adding, "We just lost a comrade at arms, this is a sad day for truth-loving Christians all over the world."[24] A similar church-linked assassination was also alleged by INC critic Antonio Ebangelista, who confirmed that the body found in Bustos, Bulacan north of Manila was that of Felix Villocino, another expelled member.[25]

conducted an investigative report on the INC, particularly the church's Canadian mission, in 2018, over reports of corruption and heinous crimes allegedly involving the church, and following Melorca's flight to Canada where the exiled former minister shared his trove of horror stories to the news outlet.[26] In a related incident, a Canadian expatriate was shot and killed by assailants allegedly under the orders of the INC over "something as benign as a property dispute between neighbours". The surviving relatives also fled the Philippines to Canada.[27] As mentioned above, the Philippine government makes their complacency (or complicity) towards the INC known, particularly when there are parts of the constabulary[note 2] who are willing to use their police powers to serve as the Iglesia's Murder, Inc.,

even suggesting a myriad of ways to rub out opponents. Melorca claimed in the interview that he nearly had a hearty serving of a grenade during a tortuous interrogation session with some of the INC's goons. Fortunately for him, the pineapple he got wasn't cooked, and he fled the country not long after, successfully pleading asylum in Canada; the Gammon family sadly wasn't so lucky though, as the property dispute went sour when the slain Canadian attempted to confront the construction crew whom he saw as displaying an air of arrogance, disrupting the family's otherwise idyllic way of life.[27] Unsurprisingly, the INC shot back at the CBC, intimidating and harassing them over what they saw as spurious accusations against their Grand Poobah.[28] To that end, they even slashed the tyres off the cars driven by CBC journalists who attempted to confront the conman-in-chief.[26][27]

Blessed are the rains down in Africa[edit]

The INC's mission in Africa isn't safe from controversy either, due to fears of exploiting the local population and turning them into even worse zealots for Manalo.[12] In March 2017, the church was banned in Zambia after a stampede stemming from a feeding program distributed by the INC killed eight people and injured 28.[29][30]

Wait, is that an arc-and-compass?[edit]

Besides the more rational criticism directed towards the group, there has unsurprisingly been conspiracy theories alleging connections between the INC and the Freemasonry, for the most part due to the elements found in the church's official seal bearing a suspicious resemblance to Masonic symbolism.[31] This led to some critics accusing the INC as a satanic cult under the guise of a "Christian" denomination or even the antichrist itself.[32]