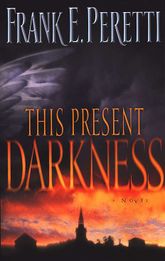 The complete guide to angels, demons, and spiritual warfare for dummies!

This Present Darkness is a contemporary Christian novel by Frank Peretti, first published in 1986. Hugely popular, the book has sold over two-and-a-half million copies,[1] a telling reflection of fine taste in Christian audiences. The story is about the fictional small town of Ashton, and how demons are trying to drive angels out of the town and incorporate New Age philosophies into the community college's curriculum.

Since its release, many Christians have seen it as a "How-To" manual for exorcisms, prayers, and spiritual warfare. This has led theologians to argue that Christians should not allow this fictional book to "redefine their entire worldview,"[2] as that is a job for a different fictional book.

This Present Darkness gets its title from the Ephesians 6:12,[3] which reads: "For we do not wrestle against flesh and blood, but against the rulers, against the authorities, against the cosmic powers over this present darkness, against the spiritual forces of evil in the heavenly places." Did you get it?

Two years after his first publication, Peretti wrote another book: Piercing the Darkness. In addition to the New Age, Peretti takes jabs at the ACLU with this one, when the damned hypocrites bring a legal case against a Christian school for using corporal punishment.

Despite the fact that This Present Darkness is popular among Christian reading circles, it is an awful book, complete with weak and poorly developed characters, stilted dialogue, an irrational plot, hackneyed conflict, straw man depictions of the occult, paranoiac conspiracy theories, and general intolerance.[4] Even Peretti himself admitted that the book was not very good and did not deserve the success it achieved.[5]

Peretti's book widely differs from most theological interpretations of the Bible. Several professors in theology are concerned that many Christian readers have adopted erroneous concepts of spiritual warfare from This Present Darkness.[6] One of the book's key elements is "the power of prayer." In the novel, when a Christian prays, he releases some form of metaphysical energy to the angels, enabling them to combat demons with swords. There is no basis for this in the Bible, therefore it cannot be true.

The book also deals with demonic possession. Virtually every non-Christian character in the book is possessed by a demon, and can be manipulated to do pretty much anything because of this. One memorable scene is the exorcism of a teenage boy, where the pastor and his buddies cast the demons out by holding him down and chanting, "I rebuke you, Satan!" Oh, and they toss around Jesus' name a lot; somehow this makes the demons "melt". With demons being so easy to defeat, it's a wonder they managed to take control of so many people.

It has been revealed that an independent movie based on This Present Darkness is in production, to be directed by Chuck Russel.[7] Though no set release date has been mentioned, hopefully it will be released soon, because we all know that Peretti's latest book-to-movie adaptations turned out great.

Long review of the book by a former Pentecostal