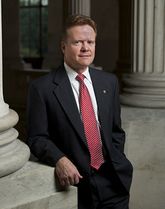 Do not fuck with this man. He makes the laws. He can break them.

Do not fuck with Jim Webb. This guy makes Chuck Norris look like a wimp. Seriously. This is the guy who brought a loaded gun with him to the United States Senate, and did not think a damn thing of it.[1]

Jim Webb was the senior Senator from Virginia, a seat he won in 2006 from George "Macaca" Allen, and refused to run for re-election in 2012, being succeeded by former Governor Tim Kaine. He is a former Republican who was so sickened by the Iraq War, among other things, that he became a Democrat and ran for the Senate. His major previous political experience was as Secretary of the Navy under Ronald Reagan. On July 2, 2015, he announced his presidential campaign on the Democratic Party ticket.[2] Unfortunately for the one guy with a "Webb 2016" shirt, he quickly dropped out. He participated in one debate, where he spent most of his speaking time complaining that he didn't have enough time to speak. Thanks, Jim. Also, he kicked a lot of ass in Vietnam.

Webb is also an author, mostly of novels about the Vietnam War, and one non-fiction book about the history of Scots-Irish immigrants to America. Many have said that his books tend to glorify violence for violence's sake. He is also known for having said some really sexist things in the past, though he has apologised for them and definitely kept any such opinions to himself recently.

He is best known for a short story the movie Rules of Engagement is based on, in which the worst fears of the war on terror waere validated, before the war actually took place.

Donald Trump considered making him Secretary of Defense, though he ultimately picked Jim Mattis instead.[3]

Webb should get a gold star for rationality in one field: drug sentencing. He held hearings (that almost no one else attended) on the problems of mandatory minimum sentences, and began to push his colleagues to make changes to the drug laws so that they better fit with empirical reality. Nothing came of this, but he is still trying.