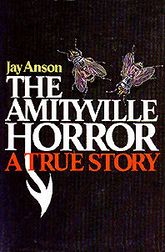 The Amityville Snorer Horror is the name given to a 1977 book by Jay Anson, a 1979 movie adaptation of said book directed by Stuart Rosenberg and written by Standor Stern, and a 2005 remake of said movie directed by Andrew Douglas and written by Scott Kosar. The plots of all three are supposedly based, some more loosely than others, on the claims made by the family of George and Kathleen Lutz, their children, Daniel, Christopher, and Missy, and their dog, Harry, that they experienced a panoply of multifarious inexplicable paranormal phenomena while living at the house 112 Ocean Avenue, Amityville, Long Island, New York, from December 1975 to January 1976. Just over a year prior to when the Lutzes moved into the home, on Wednesday, November 13, 1974, Ronald "Butch" DeFeo, Jr. murdered his father, mother, and four siblings in the house. The names of the deceased were Ronald "Big Ronnie" DeFeo, Sr., Louise Brigante DeFeo, Marc DeFeo, John DeFeo, Dawn DeFeo, and Alison DeFeo.

The case came to the attention of the wider world after an article in Good Housekeeping magazine discussed the haunting, against the Lutzes' wishes. This was followed shortly after by a book deal, and the rest is history. Needless to say, many have not taken the Lutzes' story at face value, and, indeed, Ronald "Butch" DeFeo, Jr.'s lawyer, William Weber, later claimed that the entire case was a fictional lucrative story formulated by him and the Lutzes over many sessions of drinking wine.[1] Paranormal investigators Ed and Lorraine Warren have investigated the case, and have pronounced their support of its veracity, leading many to accuse the Warrens of being frauds once Weber stated that it was a hoax. Many other investigators have looked into the reported haunting as well, including self-proclaimed vampirologist Stephen Kaplan, who also deemed it a hoax, and parapsychologist Hans Holzer, who claimed that the cause of the haunting was the corpse of an angry Native American chief buried underneath 112 Ocean Avenue.

On June 28, 1965,[2] the DeFeo family moved into the house on Ocean Avenue. From a young age, the oldest son, Ronnie Jr., had endured abuse from his father, Ronnie Sr. In one incident when the younger DeFeo was around 2 years old, his father slammed his head up against a wall after an incident involving a television. Over the years, as he got older, Ronnie Jr. became more aggressive and began to use illicit drugs. In one incident not too long before the murders, he threatened his father with a shotgun, stunning the elder DeFeo and causing him to turn more strongly to religion.

In the early morning hours of Wednesday, November 13, 1974, at around 3:15 a.m., Ronald DeFeo, Jr., possibly with assistance from his younger sister, Dawn DeFeo, murdered his parents, Ronald DeFeo, Sr. and Louise DeFeo (née Brigante), his younger brothers Marc DeFeo and John Matthew DeFeo, and, eventually, Dawn as well. Ronnie Jr. was the only survivor. He then hurried into a local establishment called Henry's Bar that afternoon and shouted "Help! I think my mother and father have been shot!" After police were dispatched to the house to investigate and came across the bodies, the sole surviving DeFeo was taken into custody and interrogated. After initially trying to convince the police that a mobster who hated his family's guts named Louis Falini had carried out the murders, he eventually broke down and confessed to carrying out the murders himself, saying "Once I started, I just couldn't stop." His trial was held a year later, in November of 1975, and he was sentenced to life in prison after being found guilty of six counts of second-degree murder.

The Lutzes and the alleged haunting[edit]

On Thursday, December 18, 1975, George Lutz, Kathy Lutz, their three children, Missy, Christopher, and Daniel, and their dog, Harry, moved into 112 Ocean Avenue, fully aware of the murders that had been committed there a year prior but being unfazed by moving into the house in which they had occurred. The first allegedly paranormal event to occur was when Harry nearly strangled himself on his own leash while jumping over a fence, but George managed to save him in time. A priest, Father Ralph Pecoraro, arrived to bless the house and was supposedly driven away by a voice telling him to "Get out!" as he was spraying holy water. Meanwhile, the family began to notice strange odors, some smelling of perfume, as well as other smells that were rather less savory, and Kathy was startled by sensations of being grabbed by invisible figures. There was an incident when Daniel's hand supposedly got crushed by a falling window and started bleeding, only to, apparently miraculously, subsequently heal. Flies appeared on the windows in the winter and would refuse to leave. Meanwhile, the five-year-old daughter, Missy Lutz, claimed to have befriended a talking pig angel named Jodie that could change its size from roughly the size of a teddy bear to larger than the house itself. George claimed that he once witnessed Kathy's face transmogrify into that of a 90-year-old crone in bed. The Lutzes also claimed that, on their last night spent in the house, their beds levitated while they were sleeping on them, and they saw what looked like a demonic hooded figure whose face they had earlier seen etched in the back of the fireplace, pointing at them from the top of the stairs, prompting them to get into their van and leave the house for good. They stayed at Kathy's mother's house afterward where they claimed that their beds, once again, levitated, as the spirits had supposedly followed them there.

The book, written by Jay Anson, was released in September of 1977. Some asserted that the book contained inaccuracies. For example, according to skeptical investigator Benjamin Radford, weather records did not show any snow in Amityville on Thursday, January 1, 1976, the date when the Lutzes, according to the book, found Jodie the Pig's gigantic cloven-hoofed footprints outside in the snow.[3] In this book, the priest's name is changed to Father Mancuso.

The original film, released in 1979, starred James Brolin as George Lutz, Margot Kidder as Kathy Lutz, and Rod Steiger as priest Father Delaney. The youngest daughter's name was changed to Amy. At the end of this film, unlike what occurred in both the book and the remake, as well as what supposedly occurred in real life, the Lutzes initially forgot their dog, Harry, when they left 112 Ocean Avenue, and George went back to the house to retrieve him and bring him along with them.

The remake film, released in 2005, starred Ryan Reynolds as George Lutz, Melissa George as Kathy Lutz, and Philip Baker Hall as priest Father Callaway. The youngest Lutz daughter's name was changed to Chelsea. Meanwhile, the character of Jodie the Pig was combined with Alison DeFeo, resulting in the creation of Jodie DeFeo, a fictional composite invented for this film. In the movie, she was murdered by her older brother, Ronnie, while hiding in a closet. The real George Lutz ended up suing MGM for their portrayal of him as a crazed, possessed violent lunatic, under the possession of Ketcham's spirit, in this film, including showing him slaughtering the family dog, Harry, with an axe in the boathouse and building coffins for each of the members of his family.

According to the original book and film, a 17th century sorcerer from Salem, Massachusetts, was supposedly driven out of Salem for practicing witchcraft. Subsequently, the sorcerer, named John Ketcham (or Ketchum), is supposed to have taken up residence in Amityville and allegedly performed satanic rituals on the land where the house would stand, leading to it being haunted. The 2005 remake elaborated on this character, changing his name to Reverend Jeremiah Ketcham, painting him as an evil reverend who tortured and killed scores of Native Americans in the basement of the house in Amityville in the late 17th century. In the film, Chelsea draws a picture of him on her Etch-a-Sketch and informs her mother, Kathy, that the ghost of Jodie DeFeo tells her that the man in her drawing lives in the house and is an "a-hole". Kathy finds out about Ketcham's devious activities after reading a book about him titled "The Reverend Jeremiah Ketcham: Chronicle of a Zealot" at her local library. Meanwhile, George discovers his torture chambers in the basement and walks through them, encountering apparitions of tortured Native Americans leaping out at him. He arrives in a dimly-lit room in which he finds Ketcham standing before him, facing away, and the ghostly figure of the evil missionary turns around, picks up a sharp-bladed knife, and slits his own throat in a reenactment of his own suicide which Ketcham had committed in a ritual that would allow his spirit to linger on in the house forever, covering George's face with gushing arterial spray. Ketcham is depicted as a man wearing a black hat and trenchcoat, with long, somewhat curly hair and piercing eyes.

Although John Ketcham remains an enigmatic figure in real life, his story can be pieced together by compiling information obtained from historical and genealogical records. It is known that a John Ketcham was baptized at the Church of St. Andrew the Great in Cambridge, England, on September 8, 1622.[4] His parents were Edward Ketcham and Mary Hall, who married at the same church in Cambridge on August 22, 1619.[5] John Ketcham had immigrated with his family to Ipswich, Massachusetts in the then-British colonies in Eastern North America by 1635.[6] John relocated from Ipswich to Setauket, Long Island, New York in 1648. After going to Newtown, Long Island, in 1668, he encountered Bethia Richardson and married her sometime later than March 14, 1676. He died, apparently in Newtown, Long Island, New York, on or shortly prior to May 17, 1697, as that was the date when his widow, Bethia, received letters authorizing her to take control of Ketcham's estate, as he had not left behind a written will before he died.[7] Corroborating historical evidence does not seem to have been found, as of yet, for the assertions made in the novel, the original movie, and the movie remake, that John Ketcham ever inhabited or visited Amityville, that he was a witch, a satanist, a practitioner of magic, or a dabbler in the Occult, that he was a reverend, or that he ever tortured Native Americans.