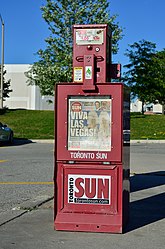 Get yours here. Or don't.

The Toronto Sun is a right-wing rag published in Toronto, Ontario, Canada. It is owned by Postmedia Network.[note 1] The Toronto Sun is to English-speaking Canada what the New York Post is to the United States and what The Sun is to the U.K. Unlike the British paper however, its "Page 3" model (the "Sunshine Girl") isn't [[nudity|naked], and is usually like a picture torn from a page of Maxim. Also unlike the British paper, for a while the Toronto Sun pretended to balance the implicit sexism of the "Sunshine Girl" by also running a "Sunshine Boy" with the differences being that the Sunshine Boy ran near the back of the paper, was usually fully clothed, and wasn't necessarily always even particularly attractive as he was often selected for his actual record of professional accomplishment rather than as eye candy.

Its sports section notes some reporters of quality who have received several writing awards. However, this is balanced out by notorious political polemicists and third-rate scribblers spouting Tea Party babble in the wrong country[2] and a comments section that is trying to give Yahoo! News a run for its money.

For a time, it had a "sister" television station, the full-on wingnut Sun News Network,[3] which opened with great fanfare in 2011 only to rapidly hemorrhage viewers, lose massive amounts of money, and quietly die in 2015 after a prolonged period on life support.[4] Such are the disadvantages of trying to emulate Fox News in Canada. Unfortunately, it found new life on the Internet as The Rebel Media, founded by former Sun News host Ezra Levant, because there's no shortage of alt-righters willing to bite there. Interestingly for a Canadian news site, they seem awfully obsessed with Donald Trump and seem to import a lot of their crankery from the American right-wing in general.[note 2]

In 2014, Pierre Karl Péladeau, who was the CEO of Sun Media for 15 years (and still owns the majority of its shares), announced that he would run for the separatist Bloc Parti Québécois in the 2014 provincial election;[5] unsurprisingly, he was one of the major reasons why the party lost the election.[6]