Mallard Fillmore is a syndicated comic strip written and drawn by Bruce Tinsley from 1994 to 2019 and Loren Fishman in 2020.[2] The strip revolves around the title character, a conservative duck-cum-news-anchorman. The strip tries to position itself as a conservative alternative to other political comics such as Doonesbury, but is totally lacking in even the latter strip's comic insight or subtlety. It is to the comics page what George W. Bush was to the Presidency: devoid of (intentional) comedy, plot, and sometimes even art.

For many years the strip was the sole creation of Bruce Tinsley (b. 1958), who has been drawing newspaper cartoons since the 1970s.[3] In late 2019, Tinsley ceased to produce new scripts and for 3 1/2 months reruns were published instead. In March 2020, new Mallards started to appear with the name Fishman, and a bit later it was revealed that it was now the work of Loren Fishman, a former music student who began his career in 2009 with a cartoon called Humoresque in piano magazines.[2] Officially Tinsley will return at some point and Fishman is merely "in charge of filling Bruce’s shoes while he’s away".[4] Tinsley seemed to stage a minor comeback in April and May, with the credited authorship and signature on the drawings both varying, so that it's no longer clear who exactly is responsible for the strip's content or art.[5]

For those not conversant with American history, Millard Fillmore was a Whig[note 1] and the 13th president of the United States (1850-1853)[note 2]. So using a clever play on words, Millard becomes Mallard—the common wild duck.

Imagine any conservative talking point produced in a rectangular strip format. You now have Mallard Fillmore! The strip is known for lazy artwork, truly baffling caricatures,[6] and poor or inaccurate sourcing.[7]

Unlike most political cartoons, Mallard Fillmore has a standard three to five week lead time. As a result, Tinsley frequently addresses political controversies that have already passed and been forgotten. An example of this was a controversial comment made by John Kerry on October 30, 2006 not being addressed by Tinsley until November 20 of the same year.[8]

While Tinsley flogs multiple wingnut positions ranging from global warming denialism to taxes his most consistent running theme is the massive persecution complex he feels from "PC" liberals who supposedly suppress conservatives virtually everywhere. This is massively ironic since it's largely accepted that the only reason editors even run Mallard Filmore is to keep conservatives happy who were complaining when the only political cartoon running in most papers was the more liberal Doonesbury.

Mallard Fillmore
The eponymous Mallard is Tinsley's anatinaean self-insert mouthpiece. He is a TV junkie who lives in squalor, routinely threatens his co-workers and has a disturbing fixation with pre-teen girls. Given that he's supposed to be the sympathetic character, you can imagine how grim the rest of the cast can be.
Mr. Noseworthy
Mallard's boss at the TV station. Noseworthy is a somewhat dorky liberal with a prominent nose and frizzy hair who controls the media. Just sayin'. This impression of Jews controlling the media is more apparent in a strip published in 2005 in which the TV executive is only slightly less stereotypically Jewish than the Jewish characters portrayed in the cartoons from the Egyptian press.[9] The alleged anti-semitic undertones of such characters pale in comparison to the problem that Tinsley's work just isn't very clever or funny.
Chantel
One of Mallard's co-workers, she is inexplicably attracted to Mallard in spite of the fact that he regularly berates her. She is perhaps the only non-strawman liberal to regularly appear in the strip, whom Tinsley uses as a mouthpiece on the rare occasion when he agrees with the Democratic party.
Chet
Another of Mallard's co-workers, an anchor with an absurdly large chin.[10] Tinsley uses Chet when his other liberal strawmen are simply too subtle.
Larry
A hapless office drone and punching bag for Mallard (and, by extension, Tinsley). He is used to illustrate the pettiest of Tinsley's pet peeves.
Dave and Rush
A Vietnamese immigrant and his son who both agree with Mallard on everything. 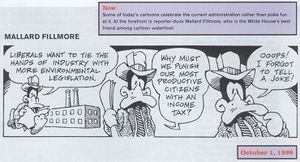 Parody of Mallard Fillmore appearing in America (The Book).

Oops! I forgot to tell a joke![edit]

A parody of Mallard Fillmore appeared in the media section of America (The Book). Nine months after the release of the book, Tinsley finally realized that he was being mocked. He responded with a series of strips in which he claimed that the book was trying to convince people that the parody strip was real,[11] concluding with a strip in which he joked about Jon Stewart being a pedophile. Tinsley was criticized for his depiction of Stewart with the traditional exaggerated Jewish nose, described by Stephen Colbert as being "clip art from The Protocols of the Elders of Zion." Tinsley responded during a subsequent interview that he'd been unaware of Stewart's Jewish heritage, and curiously enough, felt the need to criticise Stewart for changing his name from Jonathan Stuart Leibowitz.[12] This was eventually "corrected"[note 3] in the "Teacher's Edition" of the book, which states that "This does not appear to be an authentic "Fillmore" cartoon, although the authors of this book have captured accurately the strip's level of humor."[13]:160