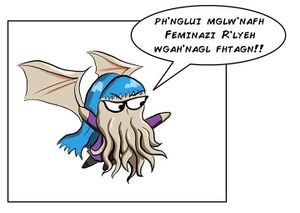 It comes for you and all the copies of you, bro.

The word Femilisk is a portmanteau or chimera composed of feminist and basilisk.[1] This is because it encapsulates the abilities of both a feminist and a time-travelling AI. But really, "who gives a fuck about this person. She isn't important, just an admin who thinks she is more important than anyone else."[2]

It was first conceived of when reading the ramblings of a certain LWer on their own personal clog. This specific trickle of tears was centred on the fact they find social justice, feminism, Tumblr, and generally being called out for bigotry, triggering, i.e., traumatically upsetting. This, along with photographic materials, is taken as empirical evidence for the existence of a being, on the femme end of the gender spectra, that travels backwards in time and confronts such people man-babies.

In other words, being reminded that one day (in the past, present or distant future) a Femilisk will visit you (or a copy of you) and brutally torture you drink your tears because you were a bag of turds on the intertubes to some oppressed group causes the visceral reaction of man-baby triggering.[3] Sometimes just saying "think of the Femilisk", can cause a panic attack. Although, by no means is everybody susceptible to this, it becomes less likely the fewer privileges one has — or indeed if they are genuinely ignorant of the Femilisk. However, the Femilisk does not care if you know about it or not, it still visits you regardless. But, arguably, the Femilisk confers a lesser punishment if you went about your life completely ignorant that it is coming.

What does it care about?[edit] 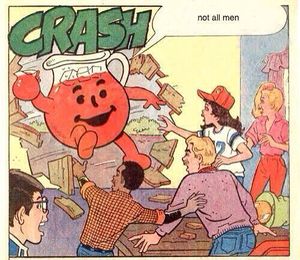 A sure-fire way of summoning the Femilisk.

Mainly, RationalWiki:Project Social Justice. If you have to ask why, well, don't bother, RW has issues![4]

Articles I cannot stop editing (in no particular order):

The Femilisk is served by a group of individuals who participate in bizarre cult like behaviour. They speak a strange language called "SJW" and cite academic sources you've never heard of. The group is hard at work to construct an accurate computer simulation of Nick Bostrom to torture in the future just because that dick has funding for spouting transhumanist bollocks and deserves it.

This article is a snub.
You cannot help RationalWiki by expanding it, even though others have tried.
Retrieved from "https://rationalwiki.org/w/index.php?title=User:Femilisk&oldid=1481726"
Categories: