A formal challenge from one master of rhetoric to another[edit]

What say you to this most eloquent of offers? Will you refuse? Will you cast down this unique opportunity being proferred to you by the representative of pure unadulterated reason? Or will you accept? MarcusCicero (talk) 18:35, 3 January 2010 (UTC)

Somebody should debate him; then the rest of us could make some popcorn and watch the sparks fly.

It doesn't appeal much to me. He's relying on my perceived vanity to make me unable to resist, and throws in some ideological taunts about rationality to boot. But he's too tedious these days to warrant it, and is rapidly becoming sad, chained up to the boot that's kicking him like a mad hound.--Tom Moorefiat justitia 21:59, 3 January 2010 (UTC)

I must confess that I always assumed that TomMoore was intended as Sir Thomas More and that the misspelling was a typically crude Americanisation. MarcusCicero (talk) 23:48, 3 January 2010 (UTC)

No, it was adopted as a deliberate misspelling in order to edit at Conservapedia. In hindsight, I probably didn't need to worry about them recognizing the name.--Tom Moorefiat justitia 00:19, 4 January 2010 (UTC)

A formal response to a most informal reply[edit] 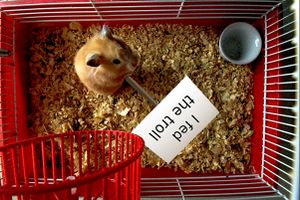 Hamster be with you

Tom, may I support your recusal from this matter? Whoever takes up this gauntlet had better be comfortable in a powdered perruque, from the tenor hitherto of the issuing side. Sprocket J Cogswell (talk) 23:56, 3 January 2010 (UTC)

I'll do it if no one else will. My rhetorical skills pale in comparison to Tom's, but I would greatly appreciate a chance to feed the troll with such a large audience. Tetronian you're clueless 00:13, 4 January 2010 (UTC)
I appreciate the support, Cogs. Thanks. Tet, I can't stop you, but I strongly urge you not to. The short-term satisfaction will not outweigh the long-term costs to us all.--Tom Moorefiat justitia 00:18, 4 January 2010 (UTC)

Wait. What is the subject of debate? The merits of mesquite over hickory smoked briskets and sausages?

Only heretics claim that Mesquite can triumph over the deliciousness of hickory. --User:Theautocrat/Sig 00:27, 4 January 2010 (UTC)

Actually, I was only kidding around. I have no desire to get in on this troll-fest. Tetronian you're clueless 03:07, 4 January 2010 (UTC)

A Formal Reply to MC[edit]

While I firmly appreciate your mirthful attempts to emulate Academic Challenges of days past, I must regretfully decline the invitation of the Rationalwiki Reform Society and Yourself. It is my firm belief that to engage in this would simply provide you with an opportunity to grandstand in a manner Most Unbecoming and which would not in any way further the Interests of this Wiki or Myself. Inasmuch as I can see, there is only a single School of Reason present here. It is only that you have been expelled from it for Misbehavior. Good Day.--Tom Moorefiat justitia 00:18, 4 January 2010 (UTC)

Mr. Tom Moore,
It saddened me to read your response to my most felicitous of proposals. Perhaps when you have had time to reflect on your collective lack of self consciousness (A humourous paradox which I'm sure won't be lost on you, dear fellow) I must re-iterate a third time my clear insistence that we simply must engage in a dialogue, immediately. I see you refuse to acknowledge the painful schism of reason which afflicts this site, that duarchy of the worship of reason without understanding it, and enslavement to reason, in complete and utter capitulation to the mighty power of human thought. It seems to me, my dear Tom, that you are standing at the very summit of the Iron curtain donning a blindfold and singing Amazing Grace to oneself out of amusement, refusing to acknowledge either the existence of east or west. Would I be correct in this analysis?

I do verily ask once again, most venerable TomMoore, to reconsider your contemptible decision. MarcusCicero (talk) 00:26, 4 January 2010 (UTC)

Actually, here's an idea. If you will permit me to set terms, I will participate. I give my word that such terms will be only those that I think will be conducive to good debate and discussion. For your part, you can pick the topic. Will that suit you?--Tom Moorefiat justitia 00:28, 4 January 2010 (UTC)

We'll set up a side debate for you. Although he doesn't talk to you because he is justly afraid of you. You are beloved and useful, after all.--Tom Moorefiat justitia 00:36, 4 January 2010 (UTC)

What are your terms? My topic is that this house condemns the vandal binning of Marcus Cicero as inconsistent with its insistence in championing rationality on the internet. I refuse to debate Mei, indeed I absolutely ignore Mei, because it personifies everything that is base about the internet. MarcusCicero (talk) 01:13, 4 January 2010 (UTC)

I'll set something up and message you when it's all ready. You will also have a side debate with Mei.--Tom Moorefiat justitia 01:54, 4 January 2010 (UTC)

I did not agree to, and will not debate with Mei. I agree with all of your other terms. Will you accept the revised terms and oust Mei from the debate? (I approached you, not her, and specifically said I wanted to debate with you). And also, can't we have a more elegant title? Like The Cicero/More Dialogues; The Dialogue of the Deaf? MarcusCicero (talk) 03:08, 4 January 2010 (UTC)

I am willing to amend the debate topic, I suppose; that doesn't seem like an issue. "The Dialogue of the Deaf" is not to my taste, but I'll accept it.
As to Mei: no, sorry. There will be no alteration of that condition because I think it is too funny not to insist upon. You are free not to debate, but these are the terms under which I will engage. Accept them, and I will happily debate you and you will be able to make your full case. Not the "trial" you wanted, but it's the best you'll get from me.--Tom Moorefiat justitia 03:14, 4 January 2010 (UTC)

(EC) MarcusCicero, sometimes one has to work within the system and do disagreeable things in order to change it. The debate with Mei is perhaps one such necessary thing.

How does Mei feel about this? Would Tom budge on that condition if Mei weren't interested?

I don't know. She may never show up or say anything; she seems to edit sporadically. But the opportunity of making him debate her is way too good to pass up. Plus, I have nothing to lose on insisting upon it.--Tom Moorefiat justitia 03:20, 4 January 2010 (UTC)

No, he is not. Any interaction or acknowledgement is what the troll wants. A troll does not care if it is abuse or applause- as long as its name is being mentioned it is happy. Tom is feeding the troll.--BobBring back the hat! 13:37, 4 January 2010 (UTC)

I would've liked to debate MarcusCicero if only to see why Mei "personifies everything that is base about the internet". But if he's going to refuse both debates because of that, I respectfully withdraw my request. Many thanks to Tom Moore who is useful. -- =w= 12:54, 4 January 2010 (UTC)

I agree with Ace and Mei. You proved (to me, at least) beyond all possible doubt that MC must go, and that we should no longer entertain his petty attempts to get everyone's attention. Tetronian you're clueless 21:08, 4 January 2010 (UTC)

Thanks, y'all. I'm done with it. I thought I would get greater mileage, but he didn't last a single exchange. The only reply I think he will merit for a while will be my template, so that's what he'll get.--Tom Moorefiat justitia 21:37, 4 January 2010 (UTC)

Nicely done. Perhaps he would have been happier if the rules forbade the use of the letter "e" -- I've seen that done before, and it takes concentration to keep it from getting stilted, but it can work, and work well. Would have been congruent with the archaic style of the offer, but style and content are two mostly different things. Go well and be well, Sprocket J Cogswell (talk) 04:36, 5 January 2010 (UTC)

To see if the movie is better than the book[edit]

What kind of stores do you check out to get LA movies like Battle Royale? It was never offically released in the US, so Asian import stores?--Thanatos (talk) 03:53, 5 January 2010 (UTC)

With all your puffery and bufoonery, you still remain an intellectual coward of the worst kind.

Come on now Tom, you have been bested by one of the greatest minds to have ever graced the intellectual world. Bow down and admit defeat like a man. Perhaps you should commit internet Hari Kari to spare the shame staining your families good name. Acei9 20:02, 5 January 2010 (UTC)

The Rationalwiki Reform Society demands that either A) TomMoore renounces his base intellectual cowardice and return to the debate or B) Unvandal bin MarcusCicero.

The case for MCs vandal binning was never justified and has demonstrably been proven to have been false.

If one of these demands is not met, the Rationalwiki Reform Society will perform numerous protest actions when RW least expects it.

WELL SHUCKS STOP I BETTER DO WHAT HE SAYS STOP I'LL GET RIGHT ON THAT STOP HOLD YOUR BREATH STOP.--Tom Moorefiat justitia 21:23, 5 January 2010 (UTC)

I just returned to this wiki after a week or so, to see you took a certain troll on, and fought with it fantastically. If I knew how to make/use barnstars, I'd award you one. Instead, I raise my glass of Guiness to you. Cheers! The Goonie Punk Can't sleep, clowns will eat me! 23:20, 5 January 2010 (UTC)

You didn't think I was going to unbin MC because I thought he'd reform, did you? It had more to do with using unbinning him (or, as it turns out, just showing interest in unbinning him) as bait to get him to tip his hand and call his bluff. Punky Your mental puke relief 02:19, 8 January 2010 (UTC)

Here, I thought he said he was smarter than the average troll. What a fuckin' loser! I came back and couldn't believe he blew his cover before I could do it for him! I suppose, from this point on, though, let us not feed the

If Goonie won't, I will:

I'd like to claim this was some sort of big plan; to agree to debate him, mock him and leave, and wait for him to blow. But it wasn't. I just thought he would be fun to mess with and that it probably wouldn't do any harm. Not a recommended tactic, and I have been justly condemned for encouraging someone whose only goal was to be a jerk to everyone here.--Tom Moorefiat justitia 03:04, 8 January 2010 (UTC)

I don't get you. I've clearly explained why you are wrong, yet you continue to propogate your bullshit. Its like you've never even heard of Jospeh Heller for Christs sake. Do you not see how absurd RW is? How full of ludicrous characters it is? If I wasn't here ridiculing you lot you would just go on about your business like everything is normal. Do you not understand that RW needs me, much like Adso needs William?*