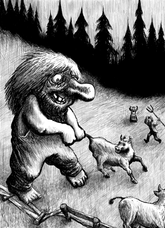 Trolling was originally a term for fishing for comments or suggestions. The term in Internetspeak has broadened to the point of becoming useless, encompassing everything from gently pushing a community's rage buttons to attempted murder. One response is to starve the troll of attention by ignoring it and going about your usual business — a tactic encapsulated in the sentiment "Don't feed the troll!". People being people, though, someone usually takes the bait, which is why trolls are so notorious.

It is probable that, for the troll, the last point is the most important. To this end, it will post deliberately inflammatory messages which generate inflammatory responses; complain about being the victim of the inflammatory responses; endeavor to obtain allies against the discrimination it feels; turn on those same allies, etc. The whole objective of the exercise is to disrupt or make someone do something you wanted them to do for laughs.

If a poster begins to post comments along the lines of, "Can’t you see how stupid you all are?" or "I keep laughing at all of you," there is a high probability that the poster is a troll.

Not every troll is (solely) an insecure attention seeker; some trolls, like those who work at the Internet Research Agency, are paid agents who work to disrupt the society of their targets (in this case, Russia's enemies) and spread propaganda serving a specific agenda (Putin's).[3] As certain nuisances here at RationalWiki have proved, not all trolls' motivations can be reduced down to simple attention seeking, even though it may play a large part in their behavior. Ideology can play a large part in a troll's motivation, for instance. Sometimes trolls will engage in trolling out of spite. Regardless of the troll's motivation, however, policy should still be to block, revert, and ignore (assuming pursuing legal consequences is not a feasible option).

Where the troll feeds on having its name mentioned or by generating debate or ill feeling, many internet users have found it effective to ignore the troll completely or respond with the phrase, "Don’t Feed the Troll". On RationalWiki, users can enter {{DFTT}} bringing up this image:

— which means the same thing. For troll posts, they can use {{trollcollapse}}.

Blocking is available on many social media sites and boards. This is most useful for trolls who aren't particularly interested in provoking any sort of reply and merely wish to disrupt. Filters and other counter-measures act as force multipliers, meaning it can take a troll twenty minutes to work out how to bypass a change it took you 20 seconds to put in place.

Some users engage in "troll baiting". In this unkind sport, the objective is to turn the tables on the troll so that it becomes enraged. While mildly amusing in the short term, it is rarely successful in driving the troll away.

Trolls take away from productive work. Minimizing their disruption involves cleaning up their mess quickly, making it costly in terms of their time to persist, but most of all managing your own response so you don't feed it.

Troll in a Nutshell

Usually, it is very difficult to tell the difference between a troll and somebody who is simply an asshole. A troll doesn't always resort to insults. Some of them pretend to hold ideals that are unpopular on a particular website or forum. For example, if one signs up for a forum that is predominately pro-choice and pretends to be anti-abortion and makes posts in favour of that position, that alone could get the same result as just insulting everybody. The best way to spot a troll is to take into consideration how long its posts are. If its posts are short, then it is more than likely you are dealing with a troll. A good troll also doesn't show any signs of anger in their posts, so it would be best to keep an eye out for that too.

On social networking sites, it is much easier to spot trolls. The first way is to look at their profile, particularly lazy lack of personalization: if the user has no avatar/default avatar or other pictures, then it is most likely a troll.[Note 2] It's also useful to take a look at how old the user's account is: the newer the account, the more likely it is a troll. Also, if this user has contacted you directly on your own page (as opposed to a group you are a member of), then take that as a tell-tale sign.

Some trolls hunt in packs. Or at least, they seem to – for all we know, the entire pack could be sockpuppets of one very dedicated person. After a while, the seasoned troll watcher can spot obvious patterns which are indicative of one of the well-known troll tribes. For example:

A subset of 4chan users (some of whom later relocated to 8chan) are edgelords who take delight in trolling liberals and those who they view as "SJWs" in various ways, often on Twitter. Indeed, the entirety of Gamergate may have started off this way. In one guise, they pose as extreme "SJWs", and in another, they "pose" as Nazis, or pose as far-right anti-semitic memes such as a gay, Jewish black person, complete with stereotypical anti-semitic avatar. In this respect, they continue the infamous tradition of weev.

However, again because of Poe's law, it is difficult to tell the difference between an edgelord who is just pretending to have far-right views to troll people, and a person with actual far-right beliefs, especially online — and it is said that 4chan's /pol/ started off with "ironic" edgelords and then was completely taken over by actual Nazis.[4]

but are in fact racist, just not that racist. This distinction is not necessarily terribly meaningful to the people who are the butt of, e.g., their Holocaust "jokes", however. If a Jewish or black person encounters such hate speech online, they are probably not going to spend a great deal of time thinking about whether the person behind the troll account really wants to kill people like them, or whether the troll is just exaggerating and just really doesn't like people of their race — they are just going to be upset, angry, or afraid.

Their repeated use of Twitter may have come about for historical reasons — for years, Twitter took an insanely cheapskate pro-free-speech view of abuse, only offering the ability to report spam, which made Twitter a haven for misogynist and racist harassers. (Years later, the Twitter CEO acknowledged that Twitter had screwed up badly by not taking abuse seriously enough.[5]) Another appealing aspect for such trolls is that it may be easier to trick unwitting/lazy journalists into writing about them without realising that they are trolls — or realising it, but not acknowledging it, for the sake of clickbait.[6]

A slightly sillier example is the group of trolls who pose as exaggerated, satirical stereotypes of Reddit users (redditors), on Youtube videos which have been linked from Reddit — these days fooling no-one, as they are usually immediately rumbled. A Chrome extension exists to filter out these jokers.[7]

As explained in Wikipedia's own essay, true vandals and trolls, as distinguished from users who dabble in minor vandalism, usually suffer from chronic alienation and real or perceived powerlessness and seek recognition and infamy by interrupting and frustrating the Wikipedia project and community. Such users experience exceptional attention as empowerment, reward, and encouragement. This is particularly true for those prolific vandals who have been immortalized on Wikipedia pages, meticulously catalogued by category pages, targeted by dedicated templates, and thereby become a notable part of wiki culture.[8]

It has been well-documented that Russia has paid for hundreds of trolls to operate out of a single building formerly at 55 Savushkina Street in St. Petersburg since at least 2015.[9][10] The troll factory targeted both Russians and foreigners, and tried to influence opinion on Russia's invasion of Ukraine, as well as the 2016 U.S. presidential election in favor of Trump.[9][11] One of the former paid trolls described the atmosphere of work as follows:

), the troll company itself (Internet Research Agency LLC, IRA), and 11 other Russians were indicted by the United States Justice Department on February 16, 2018 on charges of "Conspiracy to Defraud the United States", "Conspiracy to Commit Wire Fraud and Bank Fraud", and "Aggravated Identity Theft".[12] Prigozhin is a close associate of Vladimir Putin, who became a billionaire due to this connection.[10][13] Other indictees and their activities at IRA include:[12][14]

Trolling has also recently been used to refer to real life activities. In some ways, this resembles internet trolling: