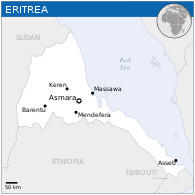 North Ethiopia Eritrea, formally the State of Eritrea, also sometimes called "Africa's North Korea", is a horrifyingly corrupt, impoverished, and oppressive East African country, demolished by decades of conflict with Ethiopia.[2] Located in the northern Horn of Africa, it has a long southern border with Ethiopia, a nation it had historically been a part of[3] before Italy purchased the region from a local Sultan and turned it into a colony.[2][4] Ethiopia got it back after World War II,[5] but ethnic Eritreans longed for independence, and Ethiopia's annexation of the region would trigger a three-decade-long war.[6] After Eritrea successfully won this war and held a referendum, they gained national sovereignty under a heavily authoritarian single-party state.[2] Five years later, a border clash would lead to the Eritrean-Ethiopian War,

which settled nothing and only resulted in two of the world's poorest countries wasting money and lives. Since then, Ethiopia has become a highly corrupt, de-facto one-party state,[7] and Eritrea is still a sovereign, totalitarian military dictatorship.[2]

Eritrea is so dangerous and unstable that the Australian government advises its citizens to avoid any non-essential travel to the country and warns against going to certain regions.[8] The US government recommends not traveling there at all.[9] It is utterly entrenched in the military, with such spending being 6.3% of their entire GDP as of 2006.[10] Even the USA only spent 3.85% that year, and a 2010 peak couldn't even top that.[11] However, the big difference is that Eritrea has no money to throw about, all while an absurd amount of people live in poverty and corruption. It's certainly a powerful army because of its large membership credit to slave labor. However, President Afwerki seems to have other uses for such an army (oppressing the public), perhaps like throwing people into shipping containers to die, among other kinds of torture and frank violations of human rights. The fact that it's also being compared to Eritrea's prisons also seems a major crimson red flag.[12] Oh, and don't feel like you can escape army service; the government can easily pull you back in when they want to. As long as you breathe, you are in the army, end of story.

One of the most censored nations in the world, period. The Press Freedom Index

ranks the country as having the third least free press, surpassed only by Turkmenistan and North Korea. It's also period to say that Eritrea may hold the joint title for the most horrifyingly totalitarian, undemocratic state. It's easily worse than DAESH and Saudi Arabia, and, you guessed it, its only competitor is North Korea. The similarities are terrifying: in both, the only actual job is military service, their governments commit mass surveillance and extreme human rights violations (which the Eritrean government denies as politically motivated accusations),[13] its people are impoverished, the country has a highly fortified border, and it just so happens to be north of a country that it was once part of. There's just one difference only, and that is Eritrea doesn't have a personality cult... yet. Perhaps, if Eritrea sticks around for much longer, they will go as insane as North Korea, and Afwerki (and successors) will claim they are sent from above to be with us all, and the country will become a necrocracy. Gazing into the country's current state, it may not be long before the insanity ensues.

Oh, and you thought the Democratic People's Republic of Korea was poor? The State of Eritrea has an even lower GDP per capita. What an achievement...

So Eritrea is, conclusively, just an all-around terrible place to live. A cursory internet search will bring up dozens of articles from various sources, all describing in graphic detail how utterly dysfunctional and backward the country is. There's a reason why the North Korea comparison is just so easy: it's that bad. Political and civil freedom in the nation is dismal in just about every metric. No matter how good the country looks from the outside, it shadows abhorrent totalitarianism that could drive you pale.

Elections and the democratic process[edit] 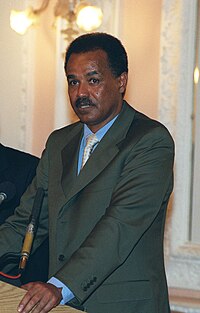 President Afwerki all the way back in 2002.

Ha! Made you look!

There are no elections.

This is not an exaggeration. There has not been one election since the Eritrean independence referendum of 1993.[14] The International Foundation for Electoral Systems has a very strikingly blank page for displaying the results of past Eritrean elections.[15] For another similarity to North Korea, here's the page for North Korea, which is also blank.[16]

President Isaias Afwerki has been around since 1993 when he was appointed by the National Assembly, which was itself in a transitional phase where it was almost entirely comprised of old Eritrean People's Liberation Front leaders.[14] Of course, the constitution they ratified mandated that free and open elections by secret ballot would be held once the country had been stabilized. Those elections were scheduled for December 2001.[17] Needless to say, they never happened. Currently, the only party allowed to be within sniffing range of power is the totalitarian nationalist People's Front for Democracy and Justice.[18] Note the similar name to the EPLF.

Sadly, there isn't much hope for any elections in the future, either. President Afwerki has rather transparently been using the constant threat of Ethiopia to justify his postponement of national elections.[19] Naturally, another violently hostile border dispute popped up in 2008, this time with Djibouti,[20] in case Ethiopia wasn't enough.

The point is that Eritrea's IFES Election Guide page will likely stay blank for a long time. 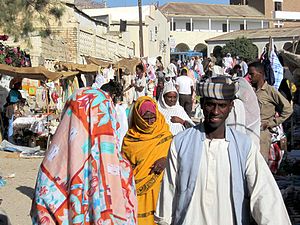 Eritrea officially recognizes the Roman Catholic Church, the Coptic Orthodox Church, Sunni Islam, and the Evangelical Church of Eritrea as valid religions.[21] Unregistered faiths, particularly Jehovah's Witnesses and Pentecostals, face brutal persecution, including routine beatings and imprisonment in deliberately harsh environments such as shipping containers.[21] Religious gatherings are banned for unregistered faiths, and the punishment often involves prolonged and arbitrary prison sentences without trial. As of 2013, the United States Commission on International Religious Freedom estimates that Eritrea has roughly 3,000 people imprisoned due to religious beliefs, with many survivors reporting being tortured.[22]

Of course, you can't sleep easy if you're a member of a recognized religion, either. The Eritrean government is more than happy to interfere in the internal affairs of these religions to control their populace and purge dissenters.[23]

You didn't expect Eritrea to have a free press, did you?

Let's start with the big one: The Committee to Protect Journalists rated Eritrea as the most censored nation in 2012. Even more censored than North Korea.[24] They cite the nation's disturbing willingness to arrest journalists for almost no reason and the President's even more disturbing refusal to account for the prisoners' whereabouts, health, or legal status.

Much of this activity occurs under the 1996 Press Proclamation Law, which mandates that all publications must be approved by the Information Ministry before release. Also, it bans reprinting material from banned publications, of which there are many.[25] Foreign journalists are also not permitted to enter the country.

This began with a ban on independent media on September 18th, 2001, when the government banned all private publications, arrested eleven people, and ordered all printing houses to stop printing everything, including wedding invitations and nightclub posters.[26] After this, President Afwerki successfully centralized the entire national press under his control, consequently reducing the nation's newspapers to little more than vehicles for ads and obituaries.

Sexual intercourse between members of the same gender is illegal in Eritrea, leading to jail time from 10 days to 3 years.[27] There are also reports of suspected gay individuals being rounded up for imprisonment or death, although the country's general environment makes these reports difficult to confirm.[28] There are no legal protections for gay or transgender individuals against discrimination, and changing gender is illegal.[29] Discourse in Eritrea is so suppressed that the very existence of sexual minorities is probably unknown to much of the nation's population.

There may be some hope, however. Although Eritrean Penal Code Article 600 bans homosexual activity (referring to "unnatural carnal offenses"), the constitution the nation adopted in 1997 likely protects the legal rights of homosexual individuals. This was found in the British case of YF Eritrea v Secretary of State for the Home Department (2003). British legal experts reviewed the Eritrean constitution and concluded that, if it were ever to be implemented, the document would legalize homosexuality.[30] The problem is, of course, the fact that President Afwerki has kept the constitution suspended ever since its adoption.

See the main article on this topic: Crimes against humanity

Given the indefinite suspension of Eritrea's constitution for more than twenty years, it's hardly surprising that the nation has no real rule of law. Its lack of a judiciary, a real national assembly, or any kind of democratic institution has created a climate where the government is free to brutalize its citizens with absolute impunity.[31] Nothing and no one can hold Eritrea's president accountable, which is, of course, the point.

A United Nations press release and many other NGOs have repeatedly exposed a multitude of crimes against humanity committed by the Eritrean government in its detention facilities, its military camps, and other locations. These crimes include slavery, torture, political murder, judicial rape, indefinite national service, and arbitrary detention.[32]

The compulsory military service is 18 months, but in reality, those drafted by it often spend the rest of their lives in government slave labor utterly unrelated to the military.[33][34] They really have no reason to still have the draft going on, as they aren't in conflict with anyone now. Eritrean children are forced to become child soldiers, usually when they are in their last school year.[35]

As can be expected with such horrific conditions, more than 400,000[33] (tried to) flee Eritrea, making them one of the biggest sources of refugees from 2001 to 2010.[36] Unfortunately, Eritrea has some draconian laws, forcing citizens to pay income tax even while living abroad (the US is the only other country to do this),[37] and allegedly employs spies to intimidate Eritrean refugees.[38]

In 2014, the Human Rights Watch (HRW) reported that Israel purposely mistreats Eritrean asylum seekers to force them to leave.[39]

Britain's asylum officials had an increase in rejected Eritrean asylum seekers, which led to a rise in successful appeals.[42] The waiting process to officially claim asylum is long; asylum seekers may have to wait for years.