not the other kinds

The Frankfurt School is a name given to a group of Marxist researchers associated with the Institute for Social Research in Frankfurt am Main.[1] Members of the group developed the concept of "critical theory" (as opposed to traditional theory), which involves applying Marxist theories to social matters in order to - in the words of prominent Frankfurt School member Max Horkheimer - "liberate human beings from the circumstances that enslave them".[1][2]

The rise of Hitler in 1933 forced most of the Institute for Social Research's scholars to leave Germany, with many relocating to the USA, and the Frankfurt School became associated with Columbia University until returning to Frankfurt in 1949.[1]

The right-wing snarl word "cultural Marxism" refers to them, though the present usage has very little to do with anything the Frankfurt School did.

People associated with the Frankfurt School include Georg Lukacs

(though he was sometimes one of its strongest critics), Walter Benjamin, 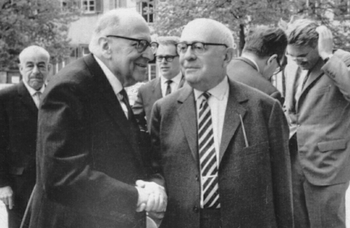 The Frankfurt School is often criticized for being overly dichotomous (there's "us", and there's "them"), disregarding that the "traditional theory" (born, according to Horkheimer, from Descartes' Discourse on Method) is far from being a single, collective entity, a theory, or even traditional. There is a lot of bickering between opposing social science schools, and one could hardly fit the whole of Western thought into a single tradition. Most critical theorists seek to fit other schools into one tradition by arguing that every other theory fits in some reinterpretation of Weber's Ends Oriented Rational Action (there is almost one interpretation per author). How this works is not clear; the School itself never makes a common point, so the consensus shifts based on the fashion of the time.

Also criticized is the idea that the Critical Theorists, contrary to the rest of humankind, are not tied to historical determination, and are therefore objective outsiders. This leads in turn to the idea that anything non-critical is working for the sake of domination (since it's historically determined by the dominant theory), and that anything thought by a non-critical would be an ideological construct for self-domination. In truth, Critical Theorists have frequently fit in with the fashion of the times, and their general principles have changed a lot over time and across authors.

On a linguistic level, critical theorists are criticized for frequently using vague categories. "Freedom" has to be the most abused and unclear concept, with usages ranging from more classical interpretations of alienation, to almost anarcho-libertine ideas. Ideas like "liberation", "revolution", "empowering", and "communicating" were pretty mainstream, but didn't have the expected metaphysical effects on the affected subjects - which more often than not resulted in a shift of subject and an internal revision (though such subjects' political movements tended to deny or ignore such revisions if they were given a lesser place in the Grand Scheme). For instance, Marcuse praised students and minorities, whereas earlier thinkers praised the working classes, artists, intellectuals, and later thinkers, such as Habermas, praised certain forms of "behavior". Early figures, such as Adorno and Horkheimer, initially assumed more classic ends, only to later switch after traumatic events (such as Nazis). Critical Theory is also attacked as fallacious, since large parts of the argumentation are rhetorical, with little practical relevance. Experimentation, or contestation of hypotheses, is totally out of subject, as Horkheimer argues. Empirical methodology, as used since Descartes, "organizes experience according to the questions brought by the reproduction of life in the current society".[3]

Many classical Marxists, especially Structural Marxists, have been critical of this "bourgeois", idealist, Socratic approach to Marxism. Some see in the Frankfurt School the beginning of a current of "marxism" divorced from political action and the working class, resulting in a process in which marxism merged with bourgeois ideology [4]. Classical Marxists also criticized Frankfurt theorists for using discarded, unedited works by Marx, which were considered outdated or ideological (the main critic of this tendency was Althusser, who argued that Marx underwent an "epistemological rupture", going from the ideologically built German idealism, to proper scientific socialism). Additionally, they jumped to their conclusions about scientific Marxism too fast, disregarding classical Marxists' own resolution of the Soviet Union's impasse. The final classical Marxist critique was of their Eurocentrism, since the critics ultimately assumed that Marxism failed because of the contemporary situation in the post-industrial First World, whereas Marxist schemes of class struggle persisted in the industrializing Third World. Marcuse acknowledges this, and would later support the Center-Periphery thesis, where his "main subjects" would be students and minorities in countries experiencing "late industrialization".

Other Schools of social sciences have directed their own criticisms against the Frankfurt School, starting from Nicklas Luhmann, working in systems theory, who plainly disregarded them as "theologists".[citation needed]

Qualitative, interpretivist approaches, which often use similar research methods (as Grounded Theory, or structural speech analysis), also criticize them for disregarding the role of individuals in their own understanding of their actions and in the construction of their daily lives in an act of inherent freedom. Also, because Critical Studies gives preeminence to the investigator, who sees underlying domination/subversion figures in their subjects' discourse, their studies tend to be hardly falsifiable; the investigator can always interpret their subject despite himself, whereas an interpretivist would try to ground their work as much as possible in the informant's own image.

Quantitative, post-positivist thought tends to be alien to the Frankfurt School's pretensions, these being hard to prove, hard to apply, and largely impractical. Horkheimer himself concluded in "Critical Theory and Traditional Theory" that they would prove their point the day their predictions came true, a hell of a criterion for falsifiability. The Critical School orients many of its critics against this particular approach, which would have contaminated social sciences with the same reductionist thinking that haunts natural sciences. According to Marcuse, empiricism discredits ideas that could be harmful to the status quo, forcing any idea to prove its operationalization and thereby killing "Reason's transcendent elements".[5]

See the main article on this topic: Cultural Marxism 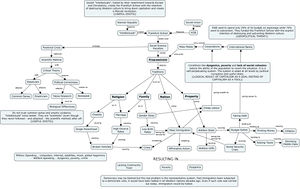 A diagram posted to 4chan /pol/ tracing "Cultural Marxism" back to the Frankfurt School, and, of course, the Jooz, see also the accompanying text in the article on Cultural Marxism.

The Frankfurt School has often been pointed to by right-leaning pundits as being responsible for a large number of modern social ills and the terms "Frankfurt School" or "Cultural Marxism" are often used by wingnuts as dog whistles for antisemitic conspiracy theories. In his 2001 book The Death of the West, Pat Buchanan argues that "the Frankfurt School must be held as a prime suspect and principal accomplice" in the titular catastrophe:[6]

Using Critical Theory, for example, the cultural Marxist repeats and repeats the charge that the West is guilty of genocidal crimes against every civilization and culture it has encountered. Under Critical theory, one repeats and repeats that Western societies are history's greatest repositories of racism, sexism, nativism, xenophobia, homophobia, anti-Semitism, fascism and Nazism. Under Critical Theory, the crimes of the West flow from the character of the West, as shaped by Christianity... Under the impact of Critical Theory, many of the sixties generation, the most privileged in history, convinced themselves that they were living in an intolerable hell.[7]

Buchanan goes on to identify the Frankfurt School as the primary catalyst behind the feminist movement ("Female boxing, women in combat, women Rabbis and Bishops, God as She, Demi Moore's G.I. Jane, Rambo-like Sigourney Weaver comforting a terrified and cringing male soldier in Aliens, and all the films and shows that depict women as tough and aggressive and men as sensitive and vulnerable testify to the success of the Frankfurt School and the feminist revolution it helped to midwife")[8] and sex education for children ("The appearance of sex education in elementary schools in America owes a debt to Lukacs, Reich, and the Frankfurt School").[8][note 2]

David Foster Wallace observed that the proliferation of ideologically consistent media echo chambers, for which right-wing talk radio deserves much of the blame, "creates precisely the kind of relativism that cultural conservatives decry, a kind of epistemic free-for-all in which 'the truth' is wholly a matter of perspective and agenda."[9]

Jerome Jamin, in a 2018 analysis of Cultural Marxism as a conspiracy theory, found that all the conspiratorial claims about the Frankfurt School and Cultural Marxism could be traced to a few sources from the start of the 1990s, regurgitated ever since across blogs and articles. The most influential figure in promoting this conspiracy theory was William Lind, author of "The Origins of Political Correctness" (2000), based on conferences held by Accuracy in Academia; editor of "Political Correctness: A Short History of an Ideology" published by the Free Congress Foundation in Nov 2004; and author of "The roots of political correctness" published by The American Conservative magazine's website in 2009. Another important source for later writers was Gerald Atkinson's "What is the Frankfurt School (and its effect on America)?" for Western Voices World News in 1999.[10] The Freedom Party of Austria promoted Frankfurt School conspiracy theories from 2004, while Nick Griffin, former leader of the far-right British National Party, wrote and spoke frequently about the Frankfurt School until the end of his leadership in 2014.[10]

A conspiracy theory is circulating that the Frankfurt School had a secret 11-point plan to subvert western civilization. The 11 points are:

This list is quoted in many places.[11][12][13] The source of this rumor seems to be an article by Timothy Matthews in the American Catholic weekly, The Wanderer, December 11, 2008, page 10. A reprint can be found online.[14] While some of the thinkers of the Frankfurt School may have had subversive ideas, there is no documentation of the existence of the 11-point plan listed above. The list seems to fit too well to the author's own political and religious agenda, and it does not reflect sound historical research.