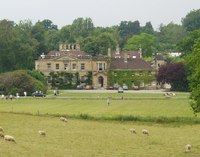 The Michael Hall Rudolf Steiner School, the first Waldorf school in the UK

Waldorf education, based on Steiner's world-view of anthroposophy, utilizes a lot of extremely weird ideas about child development, such as that children can be classified according to the classical theory of the "four humours": sanguine, melancholic, choleric, and phlegmatic.

With all this craziness, there is only one reason why Waldorf education has remained viable in the century or so of its existence: one of the tenets of Steiner's pedagogical philosophy is that children should be taught to think independently and use their imaginations. This has the dual effect of preventing any outright indoctrination and ensuring Waldorf schools' popularity among hippies and such types.

Structurally, Waldorf schools are built on a model of autonomy for, and heavy parental involvement in, the local school; for these reasons, most Waldorf schools are private, but there are also public-charter schools that have adopted Waldorf methods. The schools exclude modern technology and material culture as much as possible, especially in the lower grades, with things like television, computers, and plastics excluded from the classroom and discouraged elsewhere. Waldorf schools practice "looping", in which a teacher is expected to teach the same class from first through eighth grades. This makes teaching in a Waldorf school somewhat more of a commitment than in other schools.

Content-wise, the curriculum de-emphasizes traditional competitive academics and is based largely around arts and crafts, including various forms of drawing, painting, music, drama, woodworking, traditional architecture, and handiwork. In handiwork classes, students commonly make cloth dolls representing gnomes, which feature prominently in some conspiracy theories about Waldorf (see below). Mythology forms a central part of the curriculum in the lower grades, starting with fairy tales, progressing to Jewish mythology, then Norse mythology, then Greek mythology and Indian mythology, with fifth-grade classes performing re-enactments of the classical Olympics.

In higher grades, students are taught lessons intended to give them ethical ideas based around the unity of the natural and spiritual worlds, largely a re-hashing of the concept of karma, though retaining Jesus.

Despite the general lack of indoctrination, some religious elements remain in the Waldorf curriculum. Students recite a verse each morning before school, which Steiner intended to be a chaser to the Lord's Prayer, thanking God for providing them with the "strength of humankind". There are also seasonal festivals and rituals, such as the "Advent Garden,"[1] some of which have a somewhat pagan character.

The recent adoption of Waldorf methods at several public charter schools has drawn much more attention to Waldorf education than formerly, and unleashed a hitherto unprecedented volume of criticism ranging from reality-based to explicit conspiracy theories.

There have been complaints that the schools tend to function as crank magnets, drawing disproportionate numbers of under-qualified teachers, crackpot parents, and children with behavioral and other problems. A famous example is Eric Utne, of Utne Reader fame, who departed his magazine in the late 1990s for a trip to la-la land, after which he took up teaching at a Waldorf school that his wife had founded and his children attended.[2]

Furthermore, Steiner's pedagogical philosophy, with its stress on children's independent development, often does not allow such problems and their manifestations (bullying, for example) to be dealt with effectively. Students with disabilities and learning problems may also be neglected in some cases (though Steiner was innovative in believing disabled children should be taught in the same schools).

The differences between the Waldorf curriculum and a traditional curriculum have also drawn criticism, particularly in cases where children have to leave a Waldorf school and attend a public school. The slow pace at which reading is taught has led to considerable alarm among parents who seem to think that the sky will fall if their child cannot read War and Peace by the time they finish the third grade. The very late introduction to modern technology is also seen as leaving Waldorf students behind their peers academically.

Other features of the curriculum are seen as overly restrictive and running completely counter to the ideals of imagination and creativity. One particular sore point is painting: in the lower grades, Waldorf students must paint with watercolors on paper that has been soaked in water, producing very blurred images. This is supposed to stifle creativity.

Steiner believed that bouts of childhood disease were spiritually beneficial.[3] This means that Waldorf education has been attractive for those opposed to vaccines.[4][5][6] Prior to removal of the religious exemption in California, Waldorf schools had vaccination rates as low as 8%.[4][5][6] In 2018, a chicken pox outbreak occurred at Asheville Waldorf school in North Carolina; the school has one of the highest vaccination exemption rates in the state.[7]

Chief among the conspiracy theories brought against Waldorf education are:

A Waldorf alumnus has offered RationalWiki the following tips meant for those who find themselves enrolled in a Waldorf school: