From RationalWiki
(Redirected from Rosicrucian)
Jump to navigation Jump to search 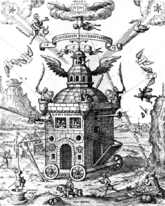 The Temple of the Rose Cross: The Rube Goldberg

Rosicrucianism denotes a woo-peddling secret society, based largely on alchemy, that transformed into a New Age-y religion in modern times.

Back in the day[edit]

. The subject of these books was a doctor and philosopher called "Frater CRC," renamed to Christian Rosenkreuz (or "Christian Rose Cross") in a later, third book.

However, some claim Rosicrucianism is even older, that the originators of the practice were the Knights Templar of Crusades fame.[2] Of course, there's no basis for this belief, but Rosicrucians still weave Templar aesthetics and lore into their ceremonies for the cool factor.

The original writings were widely dismissed as hoaxes but attracted some alchemists, scientists, and Freemasons.

Various pseudohistories have popped up around these books: their author(s) (Francis Bacon, according to some) are the subject of speculation and links for other organisations popular amongst the observant set.

(AMORC) in 1915. It was co-founded by Harvey Spencer Lewis and May Banks-Stacy.

Lewis was less well known for pseudonymously claiming that Lemurians were living under Mount Shasta, California.[3] AMORC and other various sects of the religion exist today and operate in a milk before meat fashion.[note 1]

You send away for their "lessons" and receive booklets that include information on Rosicrucian theology as well as how-to guides on all sorts of woo like "mental alchemy," telekinesis, telepathy, regeneration, and "attuning" with the "Cosmic Consciousness."

Rosicrucian theology had a great amount of influence on the Law of Attraction and, thus, The Secret.

The Order of the Solar Temple

(OTS), a sub-group founded by Rosicrucian members, participated in ritualistic suicide and murder. It was essentially a cult; its leader ordering the death of an entire family of former members, accusing them of bringing the Antichrist to the world.