The good kind of crank magnet.
Not to be confused with crank ideas about magnetism.

Crank magnetism is the condition where people become attracted to multiple crank ideas at the same time. Crank magnetism also denotes the tendency — even for otherwise "lone issue" cranks — to accumulate more crank beliefs over time. You know that old saying about not being so open-minded that your brain falls out? People with crank magnetism didn't pay attention to that. Crank magnetism is an important stepping stone on the path towards being wrong all of the time. Its opposite is the stopped clock (which is when otherwise overly credulous people actually find some crankery that they won't believe in, and may even actively denounce it).

The physiologist and blogger Mark Hoofnagle, writing in the Denialism blog in 2007, coined the term "crank magnetism" to describe the propensity of cranks to hold multiple irrational, unsupported or ludicrous beliefs that are often unrelated to one another, referring to William Dembski endorsing both a Holocaust denier and one of Peter Duesberg's non-HIV weird theories.[1] He has also coined the phrase "magnetic hoax" in relation to hoax claims that attract multiple crank interpretations.[2]

Take your average tax protester in the United States. There's a very good chance such a person will also be one or more, or possibly all, of the following: a Christian fundamentalist, a white nationalist, an anti-Semite, a neo-Confederate, a sovereign citizen, a conspiracy theorist, a birther, a teabagger, a creationist, a climate change denier, a gun nut, an MRA, a Randroid, an Austrian schooler, a gold standard advocate, a homophobe, a militia nut, a COVID-19 denialist, a cryptocurrency enthusiast, a QAnoner…

You would think that one odd or crank belief would be enough to satisfy people. Consider it a small character flaw, an homage to the irrationality of the human condition (or a reaction to the reality that some conspiracy theories do exist, such as the tobacco companies' coverup of the health hazards of cigarettes). However, people who like conspiracy theories usually like lots of them. Creationists are most likely to be on the right wing and credulous in general, while a New Ager is likely to hold beliefs from every corner of the spiritual globe. This suggests that there must be an underlying mechanism or ideal that attracts people to these ideas in general, rather than just the merit of the individual beliefs themselves. People fond of the theory of memetics would recognise this as a memeplex (a complex array of ideas of cultural significance that work together to reinforce each other) where a central idea allows others to attach themselves very easily.

One study, NASA faked the moon landing—Therefore (Climate) Science is a Hoax: An Anatomy of the Motivated Rejection of Science, gave evidence that climate change denial correlated with denial of the moon landing, 9/11 conspiracy theories, and endorsement of laissez-faire free markets:[12]

This provides empirical confirmation of previous suggestions that conspiracist ideation contributes to the rejection of science. Acceptance of science, by contrast, was strongly associated with the perception of a consensus among scientists.

Another study titled Dead and Alive: Beliefs in Contradictory Conspiracy Theories managed to show that not only will cranks be attracted to and believe in numerous conspiracy theories all at once, but will continue to do so even if the theories in question are completely and utterly incompatible with one another.[13] For instance, the study showed that: "[…] the more participants believed that Princess Diana faked her own death, the more they believed that she was murdered [and that] …the more participants believed that Osama Bin Laden was already dead when U.S. special forces raided his compound in Pakistan, the more they believed he is still alive."[14] The study therefore appears to indicate that conspiracists do not notice (or even care) about the glaring logical discrepancies that arise from being attracted to several, mutually incompatible, conspiracy theories, just as long as the theories somehow contradict the "official" version of what happened (see section "Conspiracy nuts" below). In the words of the authors: "Hierarchical regression models showed that mutually incompatible conspiracy theories are positively associated because both are associated with the view that the authorities are engaged in a cover-up".

To any rational observer of normal brain chemistry, this indicates a fundamental flaw in the mindset of your average conspiracist, somehow making him unable to notice incorrect and illogical thinking both in himself and others. Instead, conspiracists appear to continually reject objective reality and be blind to the contradictions that arise from the doublethink in which they engage to uphold their own irrational worldview. The same also appears to be true for all their ongoing, ridiculous predictions which continually fail to come true; see for instance Alex Jones.

What does drive a conspiracy theorist to simultaneously believe the JFK assassination conspiracies, the moon landing hoax and anything claimed by the 9/11 truth movement? All of these conspiracies are united by a common thread: distrust of the "official" or "government endorsed" story. This leads the believer to attach other conspiracies as well. Someone with a distrust of the government will likely reject any and all stories or reports directly issued by state agencies or other authorities that are seen as part of the establishment. Thus, any conspiracy will seem more plausible to the conspiracy theorist because this fits with their worldview.[15]

Creationism, and activism to promote it in schools (like the "Teach the controversy" campaign), often goes hand-in-hand with right-wing ideas such as global warming denial. These two positions are mostly politically motivated, and holding them requires the active rejection of known fact. The links between global warming denial and creationism are less obvious than with conspiracy theories. However, both seem to hold the view that science is merely the opinion of one group (often assumed to be politically motivated) and can be voted away. If enough people believe something, it must be true. Thus, common arguments for skepticism of global warming and evolution often revolve around "56% of Americans reject it, so it must be false".

Creationism and global warming denial can also be linked with anti-government conspiracy theories. As the US government is officially secular under the Establishment Clause, the religious right are likely to hold anti-government sentiment.

All that holds the various strands of alternative medicine together is simply not being mainstream medicine, and the theories may in fact completely contradict each other; yet practitioners and followers of one brand, such as homeopathy, will frequently find value in others, such as chiropractic and vitalism. They may consider themselves united against the common enemy of Big Pharma; vaccine hysteria in particular is a symptom of this mindset.

In February 2010, the Skeptical Inquirer published an article, "The One True Cause of All Disease" by Harriet Hall,[16] dealing with this phenomenon. In keeping with crank magnetism, alties tend not to recognize contradictions between their practices, and rarely dispute one another's methodologies or claims (though there are exceptions).[17]

See the main article on this topic: Men's rights movement

It's funny that in a movement which disparages media bias, the most prominent, visible and recognizable members include a 'journalist' who blamed video games for Elliot Rodger and thinks homosexuality and "transgenderism" are mental disorders, plus an embezzler who believes radfems control the UN.[18][19] Overall, they sound a bit confused about feminists, since they are describing traits common to all democratic societies when they talk about the vast, subterranean web of "feminist" influence.[20][21]

Vindication of all kooks doctrine[edit]

Anti-creationist blogger The Sensuous Curmudgeon coined the more unwieldy term "vindication of all kooks doctrine" to describe a similar phenomenon.[22] The Curmudgeon described it as the idea that a crank in one field will view the perceived victory of a crank in another field against the "scientific establishment" as validating their own crankery. He gave the example of the Discovery Institute latching onto the Climategate incident. Orac of Respectful Insolence saw fit to call it the "vindication of kooks" corollary to the law of crank magnetism.[23] 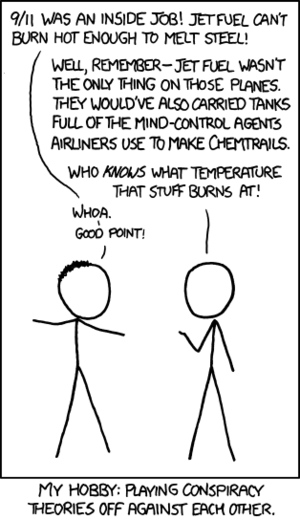 In academic sociology a similar notion to crank magnetism exists, namely Colin Campbell's concept of the "cultic milieu", which attempts to show a network and shared culture and literature that exist between various clusters of cultic groups and views.[24] The initial impetus for a variety of groups (as diverse as Scientology (founded in the 1950s), the Human Potential Movement, the Jesus Freaks, and the turn towards alternative medicine) was the shared oppositional left-wing subculture of the 1960s and 1970s, while in the 1990s, the militia, Posse Comitatus, and tax-protest movements drew on a shared milieu of an oppositional right-wing subculture. This can also cause exceptions to crank magnetism; a randomly-selected astrologer is likely to also believe in woo like homeopathy, but unlikely to believe in Young Earth Creationism, since YEC is part of a different milieu (one that often outright opposes all fortune-telling other than Biblical prophecy as witchcraft, at that).

Michael Barkun's 2003 book A Culture of Conspiracy traces the history of certain UFO and New World Order conspiracy-theories. He finds that these theories and communities were originally distinct, but that certain bookshops and magazines would sell and advertise books of both genres. He traces the gradual synthesis of the two as, thanks to figures like David Icke and Jim Keith, ideas from each milieu started to invade the other. As a result, by the 2000s the two communities had converged into a single right-wing counterculture, routinely referring to Area 51, reptilians, Project Monarch, Satanism, black helicopters, and FEMA concentration camps as being part of the same conspiracy canon. He describes the process as "improvisational millennialism", where people pick and mix (and remix) from existing conspiracy-theories to invent their own synthesis of ideas that would seem to be mutually exclusive to non-believers (e.g. combining fundamentalist Christianity with Western esotericism, New Age ideas, and Eastern religions), but are united in this particular memeset by being shoehorned into the believers' ideas of good and evil. When such theories share the same transmission channels (bookshops, magazines, websites, etc.), synthesis becomes even easier.

A related concept is that of "occulture", a neologism combining "occult" and "culture", popularized in academia by Christopher Partridge.[25] It describes the conglomerate of subcultures and shared reservoir of hidden, rejected, and oppositional beliefs and practices associated with a wide variety of spiritual movements. This includes a great deal of what Michael Barkun calls "suppressed knowledge", which inherently links with conspiracy thinking, through the idea that the powers that be want to keep others ignorant and misinformed. Similar to Barkun's idea of the cultural scene of "improvisational millennialism", but broader than millennialism, occulture is also a broad experimental "place" where beliefs and other cultural contents mix and can be combined by adepts in innovative ways.

Contents flow in both directions between occulture and popular culture[26] over time, as concepts enter the mainstream and become more "ordinary" in (for example) artistic forms, and the mainstream inspires the fringe to develop new ideas and themes. Since the age of the web in the 1990s, the mainstreaming of occulture has accelerated, a development tied to the rise of "conspirituality" (conspiracy-spirituality). The rise of conspirituality is in large part the growth into more visible prominence of so-called "dark occulture" beliefs.[27]