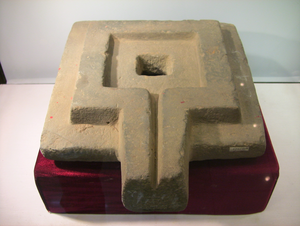 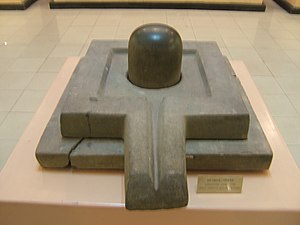 The yoni is the symbol of the goddess Shakti or Devi. In many Indian and Hindu cultures it is worshiped in conjunction with the liṇga the emblem of the god, particularly Śiva. Small models of the joined liṇga and yoni are found in all parts of India. Worship of the yoni is believed to have begun in the pre-Vedic period in India, about 4000 BCE or earlier.[note 2] and continues to be worshiped today, specifically at the Kamakhya Temple.

Archaeological evidence in India have found at least one story in which Śiva takes the form of a buffalo and is mistakenly sacrificed to the goddess and reborn from her yoni. In southern India there are numerous places where stones with clefts are worshipped as the goddess' yoni. A symbol of the yoni is the triangle, another from yoga, is the paired hands, in the form of that triangle.

Yoni steaming (in which a woman's vagina is steamed) is a modern infusion of yoni myth into alternative medicine.

This sexuality-related article is a stub.
You can help RationalWiki by expanding it.
Retrieved from "https://rationalwiki.org/w/index.php?title=Yoni&oldid=1956763"
Categories:
Hidden categories: