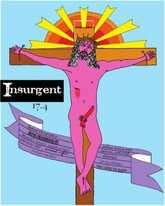 Jesus with erection is a satirical cartoon, published in the unofficial student newspaper The Insurgent of the University of Oregon, which upset a number of Christian fundamentalists in 2006.

The image is one of twelve iconoclastic images about Jesus printed by the paper, each depicting important events in the man-God's life, though not necessarily in a traditional fashion. Other images included a drawing of a naked Jesus kissing the Devil.

The cartoonist(s) from the student paper said they wanted to "start a dialogue"[1] and demonstrate that the overreaction of Muslims to the controversial European cartoon of Mohammad was not much more different from Christian reactions to perverse images of their own man-God.

Many religious people feel they have a right not to be offended by other people's words, images, actions or even ideas. This image drew the ire of the Christian community first in the local city of Eugene, Oregon (and specifically the Catholic League), then with the larger Christian fundamentalist community from around the states. The backlash against this cartoon is an example of Christians' discomfort with the subject of Christ's sexuality, and fundamentalist attitudes to sex in general. Although Jesus is believed, in most Christian theology, to have been entirely human as well as entirely divine, the concept that he may have had sexual desires is a taboo subject, even though sexuality is an important part of being human. While Christians seem comfortable with conventional depictions of the drawn-out, hideous torture and execution of their Lord, a drawing of Jesus with an erect penis tends to cause them particular anguish.

World Net Daily, among others, complained that the University's president did not take their petulant whines complaints seriously, and demanded that the president apologize to all Christians worldwide, and chastise the students involved. Bill O'Reilly demanded that the school stop attacking Christians,[2] who are, in his view, a protected class like gays (oops, they are not a protected class), blacks or the elderly ('cause those megachurches clearly have no political power, right?). It should be a crime, apparently, to attack Christianity (though we won't bring up O'Reilly's own attacks on Islam). He also called for the firing of the president, his huge staff of researchers unable to figure out that The Insurgent was not under the University's control — though the president's comments to O'Reilly and the Catholic League, and a lack of action on his part, indicate he would likely have let the pictures be published anyhow.

Overall, Christians reacted far more moderately than extremist Muslims who feel their prophet, their God or the Qur'an were insulted. There were no street riots, and no killings, as happened in the aftermath of the release of Innocence of Muslims and even more nauseatingly in the Charlie Hebdo massacre of January 2015.

Jesus with an erection is a not uncommon motif in Renaissance artwork. This is not surprising, given that Renaissance artists dissected corpses to learn anatomy,[3] which means they would have been familiar with the phenomenon of death erections