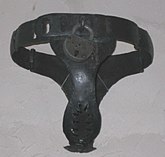 Chastity belt which used to be on display in a German museum.

A chastity belt is a belt device designed to prevent sexual intercourse on the part of the person wearing it.

The chastity belt has been popular in the public mind due to its apparent suppression of human sexuality and the dominant religious and patriarchal motives behind enforcing the chastity of the person wearing it. They've occasionally been the butt of a few jokes, such as when Robin Hood had to call for a locksmith at the end of Men in Tights. However, there's little evidence to suggest that they were as popular in history as some fiction and romantic ideals may suggest, and even when they were used, it was mostly to prevent masturbation rather than intercourse, and even then only in Victorian Britain. People who have successfully completed a long stretch of time wearing a chastity belt are sometimes called fapstinents.[1]

In fact, the device's medieval popularity is greatly exaggerated for modern BDSM sensibilities, or, like the flat earth myth, these exaggerations are intended to portray the church-dominated past as even more idiotic or oppressive than it really was. There is no credible evidence that chastity belts existed before 1500. Even then, their use would have been very limited as the metalworking of the times would have made it difficult to fashion a belt safe for long-term wear. On the other hand, they are increasingly popular nowadays for use in powerplay sex games - indeed, they are far more popular now than they ever were for "real" use. Enjoy!