Youngy dislikes Christianity, and derides its practitioners as "xtians" and "fish eaters".[3] "Xtians will try and tear us down because they know that the sand god they have is nothing more than a group of stolen religions, and if only they knew how evil their 'love thy neighbour' religion really is!!" he proclaims.[4]

"I've been a Heathen all my life, but have had an Awakening as we near the age of Ing, 2012" he says. "Our people will be as one during Ragnorok and our gods will reward the brave with a place in the great hall of Valhalla." He explains that this belief is based partly on the "hooded man prophecy" of Woden's Folk[5] which, as we have demonstrated, appears to have originated in the eighties ITV series Robin of Sherwood.

In addition to the Aesir gods,

my Hearth recognize and relate to a wide variety of spiritual beings or 'wights'. These include the Norns - who are three female entities who weave the web of wyrd - and the Disir - who are female ancestral spirits attached to a tribe, family, or individual. we also work with 'hidden folk' such as elves, brownies, dwarves and etins (giants and other not so pleasant folk). They interact with the landwights who occupy features of the landscape such as streams, mountains, forests or fields. Having a relationship with landwights is an important feature of in our religion and outdoor rituals we carry out only proceed until the permission of landwights is sought and obtained. [6]

"We have a lot of enemies such as New age hippies, ,Christians, Druids and Muslim's", he says,[7] also stating that he is "pretty sure we'll meet the scum very soon, but I'm looking forward to it!!". "They don't have a clue what or who they are," he continues, "and sit around claiming to be druids with dread locks and playing Bob Marley tunes on their drum's and guitar's. They get stoned on the **** they smoke, and start making up crazy conspiracies."

Rather ironically he states that such people are "worried the people around them are talking about them, and getting all paranoid" and concludes that "we need to keep thing's low key, but I'm not scared of anything these university drop out, dead beat's throw at me. If we do have private matter's however, I agree, it's best we use private messaging and Emails."[8]

He laments that much of the knowledge of English heathenism has been lost "due to the destruction of the Monasteries by Henry IV in the 16th century".[9] 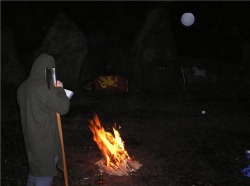 Image from the Heathen Wolves website showing an ancestral spirit doing an uncanny impression of a bit of dust.

Youngy is a prominent member of the Heathen Wolves, aka the Hearth of Woden's Wolves, aka Woden's West Wolves,[10] and ran its now-defunct website, most of which he had plagiarised from various sources. The FAQ section was copied from the Odinist Fellowship site only with Anglo-Saxon terminology inserted, while the "brief guide to heathenry" was pinched largely from the website of Heathens for Progress. Parts of the "heathen history" section were cribbed from the BBC website, despite Youngy's nationalist comrades regarding the Beeb as the one of their greatest enemies, and he'd even plundered the comedy website Godchecker to create the mythology section. Youngy's own writing could usually be identified amongst the plagiarism by his crummy punctuation.[11]

The Heathen Wolves had its own forum (apparently co-run by someone called Saxon Pete)[12]) which was a rich source of lunacy. "Ragnarok comes in three years", said member Ailric in 2009. "We prepare the way for the Hooded Man and Heimdall, reject the 'hobbyist' Odinist/Asatru groups who want to 'dress up' as Vikings. Unless you can stand with honour with our Gods and the 14 Words go away and find another 'hobby'... We do what we think is right, never back down infront of Christians, Jews, Muslims, Wiccans, Druids - they are SCUM".[13]

"As with everything remember that a forum is subject to the scrutiny of the Global Eye!", stated Ailric in another thread. "In our case the forces of Loki's brood watch our every move as we move towards Ragnarok." Youngy agrees that "it's best to keep our business out of Loki's army's eye's!!"[14]

Orbs form part of the Heathen Wolves cosmology. Ailric mentioned seeing "a most magnificent Orb" on photographs of a Woden's Folk rite, which he concluded was "clearly a sign of Ancestor spirits taking an interest in us" ("It's fantastic to hear that we had an Orb appear, I can't wait to see the photo's" adds Youngy).[15] As this orb was almost certainly just a bit of dust or a droplet of water, this raises intriguing questions about Ailric's family tree. The Heathen Wolves website contained a gallery showing several orb photos, possibly the ones discussed in the forum; however, most people will find the bloke standing next to a campfire with a hoodie and axe to be the strangest aspect of the images.

The board had a subforum entitled "Preparation Ragnarok" - a sort of Wodenist Rapture Ready, perhaps. "Ive even got a hit list of commercial businesses that will get snatch and grabbed 'after all why waste money now when its going to be up for grabs when you need it", said a member named Jim. "I like the smash n grab idea ha ha" replied Youngy.[16]

"Our Anglo-Saxon Ancestors claimed these lands well over a thousand years ago, fighting and defeating the Britons and Picts," says Youngy. "In 1066 we lost control when our last true English King, Harold II was killeed on Senlak field, but the Normans never colonized England and eventually departed, leaving our people to create what many men have lived and died for."

"They created it's society, it's history and structure, what was earned at great cost by hero's, can be lost cheaply by fool's!!" he warns. "We are in a battle for our existence and fear for our kids future. It's gone way past the point of befriending our visitors because it's become apparent that they want to destroy us and claim this land as their own."[17]

He claims that "since 1066 we have been the slaves of an anti-English government"[18] and believes that England is headed for civil war. "As for England, we are now in a struggle as a race thanks to our corrupt government who opened the gates to recruit voter's. Illegal immigration is on the rise," he says. "My people have become sheep waiting for the slaughter, thanks to the Fish eating crap they've been fed. We as a race, (we being the English) are rapidly being destroyed and denied our Ethnicity at a rate which is terrifying. We are close to a civil war... I'll just stay with my Hearth and keep my sword by my side if it ever kicks off!!"[19]

"These acts were made by one single person - Imagine an amass of nations all kicking off at once!" said Youngy in a discussion about Anders Behring Breivik. "If they keep lying to us and oppressing the nations of Europe then pretty soon we will see repeat episodes of vigilantism and terrorism. Nationalism is on the rise throughout Europe and if I had my chance I'd remind the bastard elite of the phrase 'Play with fire and you will get burnt'."[20]

He claims to have had visions of a cataclysm, which he associates with Ragnarok. "I'm more optimistic and have had dream's of the sun going out, the world wide panic and I've recently had a dream of waking up surrounded by mutilated body's, I stand up and I'm alive and well."

"Ragnorok in my dream, is my final test of strength, and I survive", he concludes. "I can't prove to you its true , but the dreams are very strong, I feel aware of whats around me and the smells etc."[21]

"We are not racist, the love of our race is not the hate of another", he clarifies. "My people do not deserve the way in which the Anti-English British government are destroying us. The Labour party have recently admitted the plan behind the mass immigration, it was to seal their position in parliament."[17]

"This has David Lane stamped all over it", commented fellow neopagan "whitebread" in response to some of Youngy's posts. "I understand your concern. There are certainly problems that need to be addressed, not just in England, but everywhere, but this makes me feel like at any moment Skrewdriver is going to start playing a soundtrack to your posts."[17]

Youngy is also an advocate of White History Month.[22]

Youngy is actively engaged with English nationalism, as he has summarised:

I was the reason my home town had a st Georges parade,

I have made two well known pro English websites,

I have sent endless petitions, emails & letters to MP's

I have leaflet dropped and recruited people to help our people regain their Identity.

I have written Pro-English poems which have been used on a major Heathen website. (our true religion)

I have given talks on English History.

I have attended many English events

I have helped organise Demo's.[23]

As mentioned above, Youngy tries his hand at poetry now and again. His works include "Even if I'm last" ("Even if you hunt me down/I'll howl to my pack to come/You'll see them arrive to eat you alive/You'll never see them hide or run");[26] "Sitting by my fire" ("I'm glad that I'm an Englisc man and not from over sea/seems all the other countries folk are full of jealousy")[27] and "Learn these Virtues" ("We worship our fidelity/our family faith and folk/Stay away from ever hurting them/be together like just fire and smoke").[28]

Youngy posts regularly under the name "Yngvi" at the Anglo-Saxon Foundation, which he has called "A great site that will go down in English history for being the awakening center of Midgard." Before he found the forum, he says, he was "one of the sheeple - I cared about x factor - big brother - Eastenders and all other bullshit sheeple food - but now I've come home all thanks to this forum and all of its members - new and old!, The WF and Shieldwall members. The WATE members, Steadfast members - all of them have helped me wake up again. The only thing I care about now is England and the future of the English! Waes Hael."[29]

He was not pleased when his favourite forum was criticised by RationalWiki: "we fucking hate you Anglophobes", he said, despite the fact that RationalWiki is not an anti-English site.[30]

One of Youngy's ASF comments was reposted at FSTDT. After it was roundly mocked someone calling themselves "Honest 1" came in to defend it, stating that Youngy's critics "most likely spend their entire days living right here in the comfort of a virtual reality" - another somewhat ironic comment, given Youngy's own rather tenuous grip on reality.

"Honest 1" was accompanied by ASF and Heathen Wolves member "Harold Godwinsson", along with "Wikitwats", "the might one AKA your'e all a load of Cunts", "Athelstan" and "Uhtred!"; interestingly, these people generally share Harold's semiliterate sentence structuring, terrible spelling, misused apostrophes and tendency to capitalise words at random. Comments from Harold and his friends include "I bet every single one of you looks like a black version of 'where's wally'", "How many Lefties does it take to change a light bulb? Answer: None: It is far to tecnical for them, and it might not suit their agenda, you see they might find out that their friends are Orc's" and "Well said HG old chap, you're a credit to your Nation".[31][32]