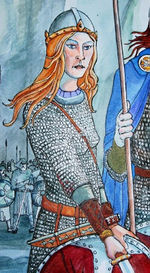 An example of Taylor's visionary artwork.

Mark Taylor is a Sussex-based artist and English nationalist. He is a key figure in the Steadfast Trust, being both a trustee and activist; he is also a moderator at the Anglo-Saxon Foundation, where he posts under the name "Scyld Scefing",[2] and used to be active on YouTube under the name "seaxwielder".[3]

Taylor was born in Bromley[4] and studied at the Croydon College of Art.[5] He currently runs the website Wyrdart, where he showcases his paintings of figures from early English history and legend. Taylor's artwork, which he has described as "visionary", has been featured on the BBC programmes The One Show and Country Tracks.[4]

He opposes miscegenation: "One dirty- coloured mishmash of humanity. It sounds revolting", he says.[6] Taylor also appears to have an interest in Holocaust revisionism and has commented approvingly on YouTube videos featuring David Irving.[1]

Taylor is critical of Christianity, complaining that "Christian morality has made us weak and emasculated our warrior spirit".[7] Instead he favours neopaganism, although he prefers the term "heathenism", finding paganism to be "pansy".[8]

He dislikes it when members of ethnic minorities portray themselves as victims of opression, but apparently has no problem with English people doing the same: his "likes" on Facebook include "Freedom of speech oh wait im English I don't have that privilege" and "Stop Censoring the English!"[9] "The hatred of the ruling class for the ordinary Englishman is unique", he says. "No other race has suffered so much from those in power."[10]

This racism-related article is a stub.
You can help RationalWiki by expanding it.
Retrieved from "https://rationalwiki.org/w/index.php?title=Mark_Taylor&oldid=2456400"
Categories:
Hidden categories: