From RationalWiki
(Redirected from Zone therapy)
Jump to: navigation, search

Reflexology is the belief that massaging specific areas of the feet or hands can cure diseases or relieve pain in other parts of the body. Allegedly, different areas of the feet correspond to different parts of the body. To relieve pain or heal a disease, reflexologists massage the area of the foot that supposedly corresponds to the part of the body in question. There has not been substantial proof that this is true. 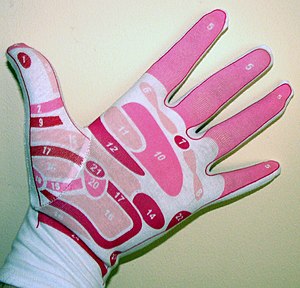 A reflexologist catcher's mitt, depicting which areas the coins from the patient's pockets need to hit to score maximum income.

Reflexology is based on the belief that the human body contains an energy field called "Qi". Practitioners claim to manipulate the fundamental "life energy" "Qi" through reflexology techniques. This claim has no scientific basis. An alternate claim is that nerve channels going to the various parts of the body are also additionally used in the foot—that is, the brain is wired in such a way that the nerves in the toes are treated the same as the nerves on the head.

Systematic reviews have not found reflexology to be effective at treating anything except sore or cold feet.[1][2] It's also likely to get you thrown out of a window if you give it to a gangster's wife.

You can buy reflexology charts and cards in health food stores that purport to show which parts of the feet correspond to which parts of the body. The funny thing is that none of these charts agree with each other. The churlish and closed-minded might infer from this that they were all made up.

Zone therapy is a simple therapy wherein the body is divided by vertical lines into five zones on the left side and five zones on the right side. The primary areas of treatment are the fingers and toes, with each digit corresponding to a different zone on the body as seen here and here.