It's like Fox News but more unhinged: Alex Jones and Qanon stuff is given as much credence as more mainstream news. It has literal Kremlin operatives as on-air talking heads. They proudly proclaim that they know the difference between an apple and a banana.[2]

OANN was launched on July 4, 2013 and "provides an independent source of credible national and international news around the clock." They are a redundantly self-proclaimed "dependable and reliable source of credible news reporting."[3] OANN says that it delivers "just the facts, empowering you to form your own beliefs" and has been praised for their reporting on current events.[4] However, they fail with political news, promoting extreme conservative causes and engaging in constant liberal and left-wing smearing and bashing to draw a more far-right conservative audience.

Media Bias/Fact Check says that OANN has a strong right-wing bias and lists them as a questionable source due to their conspiracy pushing and their misleading stories.[5]

Over time, One America News Network has become overtly supportive of Russia's global agenda. Kristian Brunovich Rouz, a Russian national and employee of the Russian government owned Sputnik News propaganda network, is an on-air reporter for One America News Network. His reports include fabricated smear jobs on Hillary Clinton and George Soros, and they occasionally sneak in Kremlin propaganda. None of Rouz's news segments include the disclosure that he works for Russia’s state-owned media. [6]

On July 5, 2017, The Washington Post, citing more that a dozen current and former OANN staff members, reported that Herring "directed his channel to push Trump's candidacy, scuttle stories about police shootings, encourage anti-abortion stories, minimize coverage of Russian aggression, and steer away from the new president's troubles". In addition, Herring banned stories using polls that didn't show Trump in the lead during his presidential campaign.

One anchorman told The Post that if they were liberal, they would still be hired, but you had to report conservative stories.[7]

In the morning of October 20, 2017, A segment on OANN had a chyron reading, "Report: U.K. Crime Rises 13% Annually Amid Spread Of Radical Islamic Terror."[8] A few minutes later, this falsity was repeated by Donald Trump in a tweet saying,

Media Matters for America traced Trump's tweet to OANN's early morning segment[11] and Snopes debunked Trump's and OANN's claim. They noted that "The number of arrests relating to 'international terrorism' and the number of terror-related homicides and attempted murder offenses increased in the year ending June 2017; crime as a whole increased by 13 percent." They also noted that these statistics came from the UK's Office of National Statistics' June 2017 Crime Survey of England and Wales, not the UK in general. In addition, the Office of National Statistics included statistics on offenses recorded in a 12-month period and said, "The 13% increase in police recorded crime from the previous year reflects a range of factors including continuing improvements to crime recording and genuine increases in some crime categories, especially in those that are well-recorded."[12]

See the main article on this topic: Roy Moore

During the 2017 Alabama Senate race, OANN wanted Roy Moore to win desperately. That includes pushing conspiracy theories against his opponents. On November 10, The Gateway Pundit started to spread rumors that The Washington Post offered $1000 to a woman so she could lie about being sexually abused by Moore. Their reference was from a Twitter account named @umpire43 and his supposed real name, Doug Lewis, who they say is a Navy veteran who served for the Secret Service. OANN was one of the many that fell for The Gateway Pundit's bait.[13] It turned out that "Doug Lewis" was a real military veteran named Jason D. Jones that died in 2007 and that the person running @umpire43 was a fraudulent account that was deleted on November 13. Afterwards, The Gateway Pundit's article carried a disclaimer saying, "UPDATE: We have not been able to confirm these allegations by Doug Lewis."[14][15]

Despite this, OANN's attempts to normalize Moore and attack his opponent weren't over. On November 27, 2017, OANN used an article from Breitbart to smear against a victim of Moore for her "violent past". The next day, after playing a commercial praising Moore and calling his sexual allegations false and "a scheme by liberal elites and the Republican establishment", OANN host of The Daily Ledger, Graham Ledger called Moore's political opponent, Doug Jones, a "real fascist left radical" and "on a constitutional level" cannot be elected.[16]

to talk about California's Assembly Bill 2943. Wheeler and Allen said that the bill's intent was to ban the sale of Bibles.

WHEELER: This is essentially criminalizing religious beliefs. And I don’t mean to speak in hyperbole here, but if this bill were to pass, would this prohibit the sale of the Bible, that teaches these things about sexual morality?
ALLEN: Well, literally, according to how this law is written, yes, it would. This is, you know, PC culture, politically correct culture, gone horribly awry. This is really directly hitting at our First Amendment rights as American citizens. Now the Democrat legislators in this building, right behind me, the California state legislature, they want to tell you how to think, what sort of books that you can read, write and purchase.[20]

Wheeler posted this clip on Facebook and it managed to get 5.4 million views, 6.2 thousand likes, and 162 thousand shares. [21]

However, what Wheeler and Allen said during that segment about California's A.B 2943 was greatly misrepresented. The bill was proposed to enhance prohibition of Sexual orientation change efforts

(SOCE) in California. The bill does not mention anything about the Bible. The thing that got the religious right angry was that the bill would apply to services whose purpose was to encourage SOCE to LGBT people.[22] Many thought that this included Bibles. An attorney and policy advisor from Sacramento told Snopes that the bill would prohibit conversion therapy "as a commercial service in exchange for monetary compensation" and "It does not apply to the sale of books or any other kind of goods, and it does not prevent anyone from speaking or writing on the subject of conversion therapy in any forum."[23]

This misrepresenation was spread throughout the internet, thanks to bad journalism. For example, this one, this one, and this one.

OANN also endorses the South African genocide conspiracy[24], and during Obama's visit to South Africa in July 2018, OANN claimed that he was supporting it.[25]

See the main article on this topic: Trump-Ukraine scandal

In December 2019, OANN devoted three hours to Donald Trump's prime ratfucker Rudy Giuliani, so he could advertise various conspiracy theories related to Joe Biden and Ukraine. The network faced widespread condemnation for this stunt by completely integrating Giuliani's bullshit into their own reporting work.[26][27]

included the conspiracy theory that the protester who was pushed to the ground in this incident (75 year old Martin Gugino) was actually involved in an antifa plot. [28][29]

OAN's chief White House correspondent in 2020, Chanel Rion, pushed the conspiracy theory on the network that COVID-19 was created in a North Carolina laboratory.[30] To support this opinion (which completely contradicts the expert opinion), she cited "Greg Rubini", a QAnon supporting Twitter account who claims to have sources inside the US government up in high places, and tweeted a long thread alleging that COVID-19 was a "GENETICALLY ENGINEERED" "DEEP STATE plot to destroy the Trump economy", and that "Fauci

(NIH) funded the production of the Corona Virus at the North Carolina BSL-3 lab".[30] (Buzzfeed News

later discovered that "Greg Rubini" was a 61-year old sound engineer named Gregorio Palusa, who lived not in the United States, but in Trieste, Italy. [31])

Media Matters' Matthew Gertz tweeted on May 9, 2020 that OANN ran a segment stating that there was "'mounting evidence of a globalist conspiracy' by the Clintons, Soros, Gates, Fauci

, & Chinese gov't to use coronavirus 'to establish sweeping population control' by backing remdesvir over hydroxychlorquine". According to Gertz, OANN also cited the widely debunked YouTube bullshit documentary Plandemic in the process.[32]

In late November 2020, YouTube temporarily suspended and demonetized OANN for uploading a video promoting a phony cure for COVID-19.[33]

Additionally, they have started promoting ivermectin as a cure for COVID-19.[34] They will also occasionally refer to it as the "China Virus".[35] 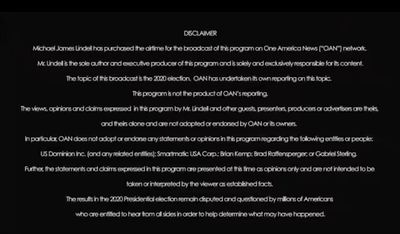 OANN attempting to cover its ass before airing Mike Lindell's MyPillow Magical Conspiracy Theory Show.
After Joe Biden won the 2020 presidential election over Donald Trump, OANN sought to pickup disaffected conservatives viewers, who were upset that outlets such as Fox News actually reported Biden as the winner, and were not repeating the baseless lies and misinformation Trump was pushing on his Twitter feed (suggesting that, reality notwithstanding, Trump had actually won.) As a result, OANN began repeating many of these bullshit conspiracy theories being pushed by Trump and his online fans. Among them was a conspiracy theory (most notably promoted by Louie Gohmert) that the "real" results of the election were routed to a server in Frankfurt, Germany. US Army forces supposedly raided the software company where the server was, and the results stored on the server supposedly showed that Trump won in a landslide (bizarrely winning even California, a state no Republican presidential candidate has won since 1992, and with a bigger margin than Indiana, a state that has not voted for a Democratic presidential candidate since 2008, and before that, 1964). (All of these events only took place in the imagination of certain over-fanatical Trump supporters.) [36][37] OANN also reported another claim (made without any evidence) that voting machines made by Dominion "deleted" votes (but only votes for Trump in states Trump lost, of course)[38][note 1]

On 5 February 2021, OANN ran a "documentary" called Absolute Proof, produced by cushion manufacturer and election conspiracy theorist Mike Lindell.[40] Under the threat of lawsuits by the companies slandered by their earlier "reporting," they ran an incredible disclaimer prior to the airing of Lindell's three hour screed.[41] OANN appeared to have run the Lindell pseudo-documentary as a paid advertisement, but it seems unlikely that this will save the network from being sued by Dominion Voting Systems and Smartmatic.[42]

OANN correspondent Christina Bobb is not only reporting on the controversial Maricopa County, Arizona recount of the 2020 election results, but she he helping to pay for it, a clear violation of journalism ethics.[43]

On August 10 2021, Dominion Voting Systems filed a lawsuit claiming that OANN (along with Newsmax and Patrick M. Byrne) defamed the company, seeking 1.6 billion dollars in damages. [44]

See the main article on this topic: Sarah Palin

From August 24 to August 28, 2015, Sarah Palin, former governor of Alaska and vice presidential candidate, was a guest host for On Point at OANN. That week, she interviewed Donald Trump,[45] Ted Cruz[46] and Cubic Zirconium and Polyester Diamond & Silk (Lynnette Hardaway and Rochelle Richardson).[47][48] Palin, with Breitbart's Kevin Scholla, reacted to ESPN after they suspended Curt Schilling from commenting duties after posting a picture of Hitler and two lines saying, "It's said that only 5-10% of Muslims are extremists. In 1940, only 7% of Germans were Nazis. How'd that go?".[49] Of course, with Scholla being a person from Breitbart and Palin being herself, instead of going with the more rational and far more reasonable answer of avoiding controversy, they decided to go with the bizarre claim that ESPN is "pushing a far-left liberal agenda" and "swallowing ISIS propaganda".[50] Robert Herring's son, Chris Herring praised Palin's segments for that week and OANN would love to have Palin back as a guest host.[51]