Massage therapy is the wonderful world of sensuous masseuses and relaxing massages commonly seen on television as well as proven techniques of sports massage; but this belies a weird, dingy and sometimes downright baffling reality full of New Agey, wooey, pseudoscientific shysters.

Massage is divided into a variety of "modalities", and each is rife with an unwarranted aura of self-importance. This list is broken into two sections, true massages, and therapies associated with massage. This list is non-exhaustive. 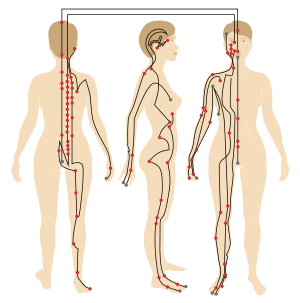 This is not a massage but it is like japanese style acupressure (though here you say ki instead of qi because of the japanese roots), but in spite of all the bullshit the session can amount to a massage that feels good. Still not worth more than 60 bucks.[note 1]

One of the more effective forms of massage, it helps to prevent buildup of lactic acid in muscles, helps prevent cramps, and done correctly, aids in keeping muscles and tendons flexible. 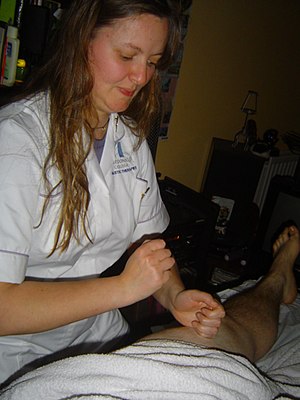 As devised by the Swede Per Henrik Ling, this is the most common and well-known form of massage. You'll find that this is quite relaxing, and may soothe some of your aches and pains. Improved circulation is also a benefit. This modality consists largely of variations on five strokes: effleurage, petrissage, friction, vibration and tapotement. Its benefits are temporary, but it can be great for things like loosening up tight shoulders when you're tense.

See the main article on this topic: Acupressure

Acupressure is acupuncture without the needles. Recalibrates one's "qi," a mysterious undetectable energy which apparently violates the laws of thermodynamics.[note 2] It must work, because it's thousands of years old, right? Like acupuncture, any genuine effects it may have appear to come from triggering the release of endorphins by way of intensity of sensation.

See the main article on this topic: Reflexology

Reflexology is the practice of diagnosing and treating illness through a person's hands and feet. Reflexologists believe that all parts of the body are connected through lines, and that by treating a corresponding line on the hands or feet they can cure a person's ills. A reflexologist might claim to be able to discern that you have a liver problem by palpating the base of your arch, and further claim to be able to heal you with more focused palpation. Hopefully their finger won't slip on the rather small space available on your foot and accidentally ram the corresponding spot for your kidneys. There is no evidence for reflexology,[1] and it amounts to nothing more than an expensive foot massage. Note that in many large cities, in particular Las Vegas, if a guy wakes up in the middle of the night with any type of organ-foot related distress, no matter how implausible, there is a 24-hour reflexology shop within 5 minutes' drive staffed by young, busty asian girls ready and willing to provide enthusiastic relief.

See the main article on this topic: Reiki

Reiki was invented in 1922, making it a relatively recent development in the history of theraputic massage. It borrows from many of the principles of shiatsu and acupressure. Practitioners lay their hands on the client along "meridian lines" and "chakras" in order to fix imbalances with their "aura." Advanced practitioners claim the ability to apply their healing vibe to patients in other places and times. Controlled studies of reiki have shown it to be of no measurable benefit, other than lining the pockets of the practitioner.[2]

See the main article on this topic: Rolfing

The principle behind this broad group of therapies is the lengthening of muscle fascia by thixotropy (melting-fascia is a colloid). This is intended to get rid of "chronic holding patterns" - basically bad posture - by allowing for more range of motion.[3] Structural bodyworkers and Rolfers believe some forms of muscle pain are caused by shortened fascia pulling body parts out of their natural position relative to one another, distorting other muscles and soft tissue into strained positions (example: shortened pectoral muscles pull the shoulder joint forward, which moves the scapula lateral from its usual position and forces the rhomboids, which run from the spine to the scapula, to be longer than they're supposed to be). Rolfing was devised by biologist Ida Pauline Rolf. To date, there are no scientific studies to back it. Rolfing can hurt. Other forms of structural bodywork vary, both in their comfort level and in the degree of their scientific backing.

Trigger points are permanent localized muscle contractions caused by injury or strain.[4] These are quite real, and treatment for serious occurrences should be left to doctors. Mild ones can be treated by licensed massage therapists, but do not constitute a separate modality; their treatment is a part of sports massage.

In spite of the woo surrounding it, massage does have a place in evidence-based medicine, especially as a treatment for psychosomatic illnesses. For an example, treating anxiety patients with massage therapies results in substantial drops in both subjective and objective measures of anxiety,[5] and it may prevent or reduce soreness from exercise.[6] In spite of some treatments being effective, one should be wary of any claims of treating specific conditions, unless recommended by a medical doctor.

Unlike many other lines of alternative medicine, massage therapy is not all bad. It can do things like increase circulation, relax you, provide pain relief, and most importantly it feels REALLY good. However, some massage therapists exaggerate their abilities and present their therapy as a cure-all.

Legally, massage therapists are bound by a strict code of ethics concerning claims they can make about their ability to diagnose diseases. They are free to assess (describe the signs they see and feel; explain what conditions are, in their experience, consistent with these signs and the symptoms the client describes, and form a treatment plan to address the concerns the client requests them to address), but not to diagnose (make a definitive statement of what condition the client has, on which not merely their own treatment but those of other professionals is based).

The other significant legal issue associated with massage is that there is a long history of sex workers using the terms masseur or masseuse as a euphemism for prostitute. A "massage parlor" is usually, to this day, part brothel, while a "massage clinic" is normally a location for licensed massage therapy. Licensed massage therapists routinely have to field passes from clients with mistaken expectations about the service which they have hired. The term licensed massage therapy is legally restricted to practitioners with state licenses, who subscribe to a code of ethics which strictly prohibits them from engaging in any kind of sexual interaction with their clients. Those who wish a straightforward, nonsexual massage should confine themselves to licensed massage therapists, or simply be aware that there may be some hanky-panky going on in the back rooms of a given parlor.

With respect to massage therapy, like most alternative medicine, governments have faced a dilemma: legitimize it by creating legal standards for it, or not recognize it at all and, e.g., let acupuncturists use dirty needles.[7]

There are proven techniques in massage therapy which can really help people,[8] but there is also quite a bit of bullshit in the field. As an example, the National Certification Examination for Therapeutic Massage and Bodywork in the United States asks questions relating to Traditional Chinese Medicine and to Cranial-Sacral Therapy alongside questions concerning anatomy. So, in order for a massage therapist to pass this "national certification" test, they must be familiar with a good deal of woo.

Despite its name, however, the national certification examination is not the test for all massage therapists in the United States. Many states have independent examinations, which are varied in how much (if any) eastern mysticism they cover. For example, the Washington state exam has no references to woo-based techniques at all. In addition, most states (whether or not they use the National Certification Examination as their testing tool) have substantial additional training requirements for a massage therapist to become licensed, including coursework in anatomy, physiology, pathology and kinesiology.