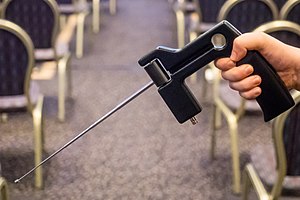 A soldier's ass, seen here with the so-called "bomb detector" in question.

The ADE-651 is a device marketed as a bomb detector. It is used widely in Iraq for that very purpose, and has generated millions of pounds in profits for its developer, Jim McCormick, and his company ATSC. There is, however, just one problem: the ADE-651 is literally a useless hunk of plastic, and does not detect bombs, or anything for that matter. The product was banned in 2010[1] and Jim McCormick was finally convicted of fraud in April 2013.[2]

ATSC built and sold the ADE-651 detectors throughout 2008 and 2009, advertising them as the ultimate bomb detector. The specific claims were that the device was powered by "the body's energy fields" and it detected bombs using special cards that had been through "the proprietary process of electro-static matching of the ionic charge and structure of the substance". In addition to this magic, the detectors were claimed to be able to operate at great distances (5000 metres from an aircraft) and to get around all methods of bomb concealment. The method that it uses to detect bombs hasn't even been fully agreed upon by its inventors, with one source claiming "electrostatic ion attraction" and another claiming "electrochemical (Thermo-Redox) detection". To anyone with some knowledge of chemistry, both of those will sound nonsensical in the context of remotely detecting a bomb. The device is not entirely new: similar bomb detectors have been tested and rejected previously.[3]

Dr Markus Kuhn of Cambridge University's Computer Laboratory opened one of the ADE-651 for the BBC's Newsnight program in January 2010. On examination, the "bomb detectors" turned out to depend on nothing more than the kind of technology used in stores to prevent shoplifting — the "programmed" cards contained nothing more than an anti-theft tag, which are mass produced extremely cheaply (which is especially galling considering the ADE-651's five-figure price tag). Dr Kuhn concluded that it was impossible for the cards to actually do anything: "There is nothing to program in these cards. There is no memory. There is no microcontroller. There is no way any form of information can be stored".

Retired USAF officer Lt.-Colonel Hal Bidlack compared it to a ouija board,[5] while James Randi compared the devices to dowsing — which McCormick himself admitted to, saying the theories were similar. Randi also offered his $1 million challenge to the overpriced device's creators. Randi's first challenge was in October 2008, and again in November 2009 after it was revealed that the product was being sold for use in Iraq. Randi's challenge asserted that the ADE-651 was a "useless, quack, device which cannot perform any other function than separating naive persons from their money", something that the developers failed to refute when the challenge was originally issued and when it was reissued.[6] Following the minor media circus around the device in early 2010, Randi also suggested McCormick refund his profits to the victims of Iraqi bomb attacks.

In April 2013, McCormack was finally sentenced to 10 years in prison for three counts of fraud for selling the device.[2] The Court heard testimony from British Army officers, that many bombs had passed through checkpoints using ADE-651 devices in Iraq, causing casualties. The Guardian noted that McCormack charged £10,000 for the device, even though they were built from "£15 novelty golf ball finders".[4] According to the Iraqi Interior Ministry's inspector-general Aqil al-Turehi, "There was corruption associated with this contract and we referred to this and submitted our report to the Minister of the Interior. We said that the company which you made a contract with is not well-regarded internationally in the field of explosives detectors, and the price is very high and not commensurate with the abilities of this device."[7]

Like most woo-pushers, the ADE-651's inventors developed numerous reasons as to why the detectors didn't work[more detail please] as numerous news agencies performed their own experiments with them throughout December 2009 and January 2010, many quite dramatically showing the device failing to react to dangerous substances that were placed very obviously near them. Even in more controlled tests of the device, it worked no better than chance at detecting anything. Their primary excuse was that the operators "need to be relaxed" in order for them to work — so they seem to presume that reporters in a nice, comfortable and safe office will be more tense than bomb disposal experts.

The ADE-651 still has a major supporter, however, in the shape of Major-General Jehad al-Jabiri, head of the Ministry of the Interior’s General Directorate for Combating Explosives. He is responsible for the continuing use of the devices in Iraq, and blames their lack of success on operator error. Hundreds of people have died due to this "operator error," but al-Jabiri is unmoved. "I know more about bombs than anyone in the world," he says.[8]

The ADE-651 is not alone in being a horseshit detector. Other "detectors" include:[9]