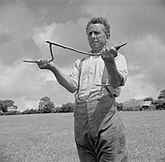 Dowsing is the attempt to detect "hidden" things, such as water, gems, and gold, under various surfaces. It is most commonly associated with looking for water for drilling of wells. So called "water witches" make a living telling people where to drill for water wells. Practitioners use dowsing rods (usually made of wire or a forked twig, but let's face it, anything would do), to detect these hidden sources of wealth. The rod appears to move up and down outside of the practitioner's control. This is actually due to the ideomotor effect where small muscle movements in the arms and hands cause the dowsing rod to move up and down.[1] These muscle movements can be completely involuntary but are often voluntary in the sense that anticipation on the part of the practitioner may cause them to increase in force and frequency. Much of the ideomotor effect is outside of direct conscious experience, so the practitioner doesn't realize she or he is doing it, though it is more than conceivable that some "water witches" know what's going on and are consciously defrauding people. 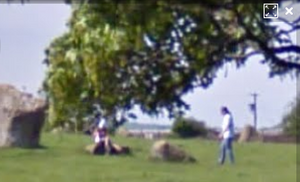 Someone apparently dowsing (possibly for ley lines) at Long Meg

Numerous controlled studies of dowsing (the first one being conducted in 1641[2]) have consistently demonstrated that it simply doesn't work; dowsers are no better than chance at detecting hidden metals or water. The continued support for dowsing is probably due to the phenomenon that if you dig down deep enough you will eventually find water. A dowser could point at random and the person could dig, and eventually hit water. This is nothing special about the dowser or the forked stick, coat hanger, or other "equipment" he or she is using.

One dowsing products company has also taken a more dangerous and sinister route with special rods claimed to detect explosives and land mines.[3]

For those who wish to believe that ersatz controls and rudimentary electronics make for a better dowsing rod, a number of entrepreneurs have developed dowsing rods with these sorts of fancy decorations called "long-range locators", enabling would-be dowsers to spend far more money with less unnecessary logic or common sense than they normally would on their equipment. Metal detector geek Carl Moreland reviews a number of them at GeoTech. Prices for such devices run into the thousands of dollars, with most units being little more than an assembly of naively-wired electronics and embarrassingly shoddy workmanship. Apparently, the Iraqi government has bought a ton of these (ADE-651) for finding bombs in passing cars.[4] The UK-based purveyor of these devices was convicted of fraud in 2013.[5]

On the Channel Island of Jersey (not part of the UK but part of the British Isles) a dowser cost the local government a small fortune in 2007 by convincing them that underground water was reaching the island's aquifer via subterranean rivers from France.[6]

The majority of UK water companies confirm that some of their engineers use dowsing to locate leaks, although most companies claim they do not encourage the use of dowsing.[7]