Caliph Ibrahum, humble servant of Allah, sporting a looted Rolex watch during his inaugural sermon. The Imam of the Grand Mosque in Mosul where this photo was taken had been murdered by Daesh just prior.[1]

Abu Bakr al-Baghdadi, real name Ibrahim bin ‘Awad bin Ibrahim al-Badri ar-Radawi al-Husseini as-Samara’i[note 1] (1971–2019), was an austere religious scholar a mysterious figure and self-declared Emir of the State of Islam in Iraq and Syria, or "DAESH", alleged descendant of the Prophet Muhammad[note 2][note 3], Commander of the Faithful (Amir al-Mu'minin) and Caliph of all Muslims.[3] He was known under multiple pseudonyms and noms de guerre, including Abu Du'a[note 4] and Caliph Ibrahim al-Badri.

Baghdadi's accession to the office of caliph did not occur without controversy; the title of "Commander of the Faithful"[note 5] was disputed by the Taliban boss Mullah Omar

and his al-Qaeda and Afghan veteran supporters until his death was belatedly announced two years after the fact.[4] Daesh proponents who put forth Baghdadi as the leading protagonist cite Imam Ahmad ibn Hanbal

Baghdadi is believed to be an Iraqi national born in the city of Samarra in 1971. He attended the University of Baghdad where in 1996 he earned a bachelor's degree in Islamic studies. He proceeded to further Koranic studies and obtained a Masters degree in 1999, and a PhD in 2007, both from the Saddam University for Islamic Studies in Iraq.[5] He is said to have founded (c.2003) his own small insurgent group, the Jaysh Ahl al-Sunna, active in Samara, Diyala and Baghdad. He was held captive by U.S. Forces-Iraq at Camp Bucca near Basra from February until December 2004 as a "civilian detainee" but eventually was recommended for an "unconditional release" by a Combined Review and Release Board. While in Bucca, Baghdadi made contact with several of Saddam Hussein's ex-military and intelligence commanders from the Ba'ath Party who were to became Baghdadi's deputies in the organization Daesh.

Upon his release Baghdadi signed on with Jaysh al-Mujahideen for a time in 2005. Its spiritual adviser, Abu Abdullah Muhammad al-Mansour, wrote of the man who would become Caliph:

In 2006 his group became associated with the umbrella organization collectively known in Western media as al-Qaeda in Iraq (AQI)[note 6], the precursor of the Islamic State, led by Hamid Al-Zawi

[note 7] Abu Bakr al-Baghdadi was appointed General Supervisor of its Sharia Committee and member of the internal self governing Majlis. In 2010 Hamid Al-Zawi[note 8] was killed, Ibrahim Al Badri promptly changed his name to Abu Bakr Al Baghdadi, later adding the tribal additions of Al Hussaini Al Qurayshi designed to position himself as in the line of the Prophet Mohammad. Baghdadi boasts of extensive "security and military experience", and is said to be a former member of Saddam Hussein's notorious, elite gestapo organization, the Fedayeen Saddam.[7] 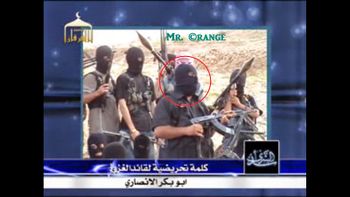 This fake was circulated to create the myth Baghdadi was a war-seasoned leader of men. In fact Baghdadi served as a "letter box" and messenger boy during the insurgency, and worked for the Americans as a negotiator between rival factions to keep the peace in Camp Bucca prison.[8]

In a two month period beginning in March 2011, the Islamic State claimed 23 attacks south of Baghdad, all of which were alleged to have been carried out under al-Baghdadi's command. The organisation became the leading insurgency group in post-American occupied Iraq. The Islamic State courted alliances with Sunni tribes[9] that previously fought alongside American forces against al-Qaeda, but were abandoned by the Americans after they withdrew in December 2011.[note 9]

While Zarqawi, the founder of Daesh, reluctantly proclaimed allegiance to bin Laden, Baghdadi maintained he never did. Nonetheless in eulogizing the deceased Emir of al-Qaeda killed by American Special Forces, Baghdadi threatened retaliation with blood, destruction and fear.[10] Three days later, Baghdadi claimed responsibility for an attack in Hilla, Iraq, that killed 24 policemen and wounded 72 others. On August 15, 2011, a wave of suicide attacks began in Mosul which culminated in over 70 deaths. Shortly thereafter, Baghdadi's pledged on AQI’s website to carry out 100 more attacks in retaliation for bin Laden’s death.[11]

As Caliph he has been somewhat partisan in recognizing and accepting the oaths of allegiance given him by non-Arab Muslims.[12]

On April 8, 2013, Baghdadi tried to subsume control over the Jabhat al-Nusra, the Syrian arm of al-Qaeda, run by a former Baghdadi lieutenant, Abu Muhammad al Julani. Julani rejected the efforts and upheld his oath to al-Qaeda and bin Laden's successor, Ayman al-Zawahiri. On May 23rd Zawahiri publicly dissolved Baghdadi's new entity, Daesh, and said Baghdadi's operations as the Islamic State of Iraq should be confined to Iraq. Baghdadi openly defied Zawahiri's order. Efforts to mend the rift between Daesh and Jabhat al-Nusra failed when al-Qaeda's mediator was murdered by suicide bombers.[13]

In October 2019, it was reported that he has been killed in a US raid, in which he detonated a suicide vest.[14] He was eventually replaced by Abu Ibrahim al-Hashimi al-Qurashi in that month. In 2022, he would perform the same act as Baghdadi.[15] So far, we are still expecting conspiracy theories to pop up.

For the benefit of below, here is a brief understanding of Arabic names.

From this we gather that his father was called Awwad, that he thought "beautiful" was a good name for his son (though the literal reading of al-Badri is "the moonfaced"), and that they were from Samarra in Iraq.

From this we gather that his father 'Awad is the son of another Ibrahim, that our Ibrahim is beautiful ("al-Badri") and merciful ("al-Radawi"). He is also a descendent of Hussein, a grandson of Mohammed, and is from Samarra.

The shorter of his new names is much different: "Abu Bakr al-Baghdadi al-Qurashi al-Husseini"

Now his personal name is "Abu Bakr". He is from Baghdad (al-Baghdad), and is descended from Mohammed's Qurashi tribe through Hussein.

The last two names are dripping with questionable content and irony, particularly in that he isn't even from Baghdad, let alone from the Qurashi tribe or descended from two Shias in Hussein and Ali.[16]