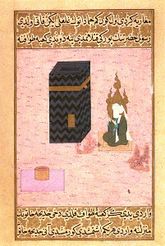 Artist's impression of The Kaaba
The Kaaba is a small building within the al-Masjid al-Haram (mosque) in Mecca. It is the main site of worship in Islam. In pre-Islamic times, it was a center of polytheistic worship. Most notable amongst the Arab gods was the patron god of the Quraish tribe, the moon-god Hubal.

The Kaaba contains a black stone (al-Hajar al-Aswad or الحجر الأسود) which Muslims hold to have fallen from heaven. Traditionally, the stone is believed to have been white upon its descent, but has since turned black under the weight of earthly sins (or just oxidation, perhaps…). It is also believed that on Judgement Day, the stone will grow eyes and a tongue. The stone will speak for those who have sincerely touched it.[1] The last two are not official Islamic doctrines. The stone is, according to many scholars, a meteorite. The stone is currently encased in a silver frame that is vulvar in shape.

A reason for the Sunni injunction against depictions of Muhammad is that it would invoke idolatry, something looked down upon in Islam. However, facing the Kaaba every time you pray, being obligated to journey to it at least once, and clambering over each other to snog a chunk of rock is a-okay. Go figure.

The Kaaba is probably the most prayed to spot in the entire world. 5 times every day, 1.8 billion Muslims pray to this part of the world. If it wasn't for Islam, the Kaaba would've been a much less exciting place.

This Islam-related article is a stub.
You can help RationalWiki by expanding it.
Retrieved from "https://rationalwiki.org/w/index.php?title=Kaaba&oldid=2380958"
Categories:
Hidden category: