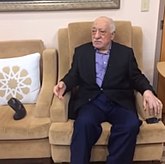 The Gülen movement, also referred to in Turkish as Hizmet (the Service) by its adherents or as Cemaat (the Community) by its opponents, is a conservative Islamic movement cult led by Fethullah Gülen (1941-), a Turkish cleric who created a personality cult around himself.

The cult used to be a close political ally of Recep Tayyip Erdoğan and AKP, his party until a power conflict between them in 2013. Erdoğan and AKP started to call them as the Parallel State (as a reference to the "deep state").

They're usually accused of being behind the coup attempt of July 15, 2016 in Turkey. After the failed coup attempt, their name changed again, this time to FETÖ.[note 1] This name is used by both the Turkish government and its opponents.

The cult has opened branches over much of the world, including schools (read: missions) in Central Asia, Africa, Europe, and the United States. The cult is widely known for heavily meddling with the military, government, media, education, the police and the legal system of Turkey and for their heavy discrimination against non-Gülenists. They are strongly opposed to Kemalism and secularism.

The government of Turkey, which survived through four coups and numerous coup attempts, saw yet another coup attempt at the early midnight of July 15, 2016.

The coup was very poorly planned and executed and only a small faction of the army joined it. The coup plotters could only seize the Bosphorus bridge, TRT (Turkish national TV channel) and some neutral and Kemalist TV channels (which is even more curious considering the fact that they made the speaker at TRT read some Kemalist sounding propaganda). They couldn't cut the electricity or TV lines.

All the political parties, both the ruling party and the opposition, opposed the coup attempt. Erdoğan accused Gülen and his cult of orchestrating it. He told the people to get out on the streets. This unorthodox strategy (they have tanks and machine guns, goatdamnit!) unexpectedly worked.

The parliament was bombed by planes. The coup was easily defeated the same day and the soldiers surrendered immediately after they found out it was a coup attempt. Really wonderful planning!

Such awful planning and execution, the fact that Erdoğan wasn't even at Ankara during the coup attempt, his former alliance to the cult itself and the fact that Turkish intelligence knew of the coup attempt even though not telling it (guess what happened to its head) led to lots of conspiracy theories that the coup was a show, even while there's no evidence about that.

After the failed coup attempt, Erdoğan, who used to be in very close terms with the cult until a power conflict began, started targeting people who are are even loosely tied to or are sympathetic to the cult (except the politicians in his own party) in a massive nationwide purge. Yet even this purge was a mess, because everybody was accusing everybody they didn't like.

Erdoğan has behaved as if this failed coup attempt was as important as the defeat of Hitler, and blows it out of proportion just to show himself as the "good cop".

In March 2017, the Turkish government requested that the United States deport Gülen back to Turkey to face charges.[2] However, because Gülen is a permanent resident of the US, extradition is required, and this does not appear to be forthcoming due to insufficient evidence. Also in March 2017, James Woolsey, a former-CIA director and Trump campaign advisor, stated that Trump National Security Adviser Michael Flynn had met with the Turkish government in September 2016 and plotted how to extrajudicially deport Gülen to Turkey, tantamount to plotting a kidnapping.[3]

And so, Gülen stays at his home in Pennsylvania. This is why Erdoğan sometimes also calls the Gülen movement Pennsylvania.

A large number of charter schools in the United States that are run by Turkish and Turkish-American staff have been linked to Gülen.[4] These schools have become controversial, especially in the aftermath of the coup attempt, with the Turkish government getting involved.[5] Some of the schools have been involved in fraudulent activity.[6][7]

Attempts at taking over the world[edit]

This cult is pro-science, wanting to reconcile their religion with it, in Gülen's English writings at least, despite himself being a creationist. Nevertheless, in the 1990s Gülen did go off on an anti-Semitic rant blaming the Jews for communism in Turkish, even though he is supposed to be against anti-Semitism and conciliatory toward Israel in English.[8]