The Taliban (طالبان, ṭālibān, the word in Pashto means "students"[1]) comprise a politico-religious group of fundamentalist Sunni Muslims. In 2021 it won its insurgency against the former government of Afghanistan, defeating that government's troops and backers in NATO (especially the United States).[2]

The Taliban first rose to power after the dreadful Soviet-Afghanistan War of 1979-1989. Many of its followers became radicalized in Saudi-funded Pakistani religious schools[3] during and after this struggle.[4] From 1996 to 2001, the Taliban ruled Afghanistan as an Islamist theocracy. The regime's strict interpretation of Sharia led Taliban members to brutalize the people of Afghanistan, especially the women. The Taliban was responsible for massacres, deliberate starvation, and the destruction of villages and farmland.[5]

In 2001, shortly after the outbreak of the Afghanistan War, a US-led coalition and their Afghani allies drove the Taliban from power. The Taliban continued to claim to be the legitimate government of Afghanistan, disregarding the opinions of those who labeled it a terrorist organization. It fought alongside Al-Qaeda. In August 2021 Taliban forces again took power in Kabul.

Most analysts see Taliban doctrines as closely related to those of the Muslim sect of Wahhabism.

In line with its own name (Taliban, meaning "students") and background, the Taliban expresses strong support for education. (Remember this when social reformers next call for more education as a way of combatting society's ills.) It's just a matter of educating the right sort of people (male) with the right sort of curriculum (religious) - compare Boko Haram, and contrast Roman Catholic seminaries.

The Taliban was created in the early 1990s by Afghan mujahideen, Islamist insurgents who had fought against the Soviet invasion of their country.[6] The war left 1.5 million dead, leaving many of Afghanistan's children as orphans.[7] These angry and bitter youths were sent to Saudi-financed religious schools in Pakistan to learn to fight in the spirit of jihad.[7] An entire generation of Afghans were transformed into fertile stock for an Islamic terrorist group.

In its early days, the Taliban received covert support from Pakistan and the Central Intelligence Agency because clearly that brilliant plan was never going to backfire.[6] In the ruins of postwar Afghanistan, the Taliban gained popular support by promising to bring peace and prosperity. After the collapse of the Soviet-backed communist government, Afghanistan formed a new government called the "Islamic State of Afghanistan"[8] (not that one). The religiously fervent Taliban rose up against the new government, leading to a civil war that lasted between 1992 and 1996 and caused thousands of deaths.[9] The Taliban, of course, won, and that leads into the rest of the story.

The Taliban's power and ideology also has a racial component. The Taliban is primarily comprised of and supported by the Pashtun ethnic group, who are generally ultraconservative and deeply tribalistic. Pashtuns consider themselves to be the rightful rulers of Afghanistan, as they are the largest ethnic group, but the Soviet war and the US invasion saw them struggle against foreigners and ethnic Tajiks (most notably among the US' allies on the ground, the Northern Alliance).[10]

It's also worth noting that Bill Clinton's presidential administration supported the Taliban's victory in the civil war due to oil interests as well as the desire to contain the influence of Iran.[11] 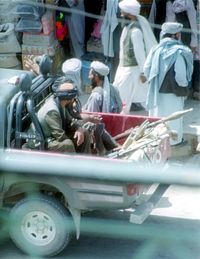 Governing as the "Islamic Emirate of Afghanistan",[12] the Taliban's rule was relentlessly totalitarian. Their assumption of power was quickly followed by a slew of morality regulations in line with the strictest interpretations of Islamic law. These regulations range from the terrifying to the ridiculous.

Women suffered the most under the Taliban. They were not allowed to leave the house unless covered from head to toe under threat of punishment by the Taliban's religious police.[13] Female patients were also only allowed to see a male physician if accompanied by a close male relative.[13] These restrictions also extended to foreigners. The Taliban demanded that female humanitarian aid workers not be permitted to drive, as such a thing was "against Afghan tradition and has a negative impact on the society."[14]

Men were also subjected to harsh lifestyle restrictions. They could be jailed for up to ten days by the religious police for trimming or cutting their beards, a "crime" which was easily detected because the Taliban regularly had its fighters patrol Afghanistan's cities and countryside.[15] The Taliban also banned music, kite-flying, photographs, television, feeding pigeons, dancing, and "sorcery."[13] It's the kind of thing that would almost be funny if it didn't happen in real life. The Taliban also required non-Muslims to wear yellow badges identifying them as such because it's not like that would raise any red flags.[16]

In a fine example of the suffering which often follows from extremism, the ban on women working caused considerable hardship for many families as they lost a source of income, affecting especially those with only a female parent. Families often had no choice but to flee the country, beg their communities for support, or resort to prostitution. This was only worsened by the Taliban's complete neglect for social services.[6]

In what was either a petulant snit fit at the international community's lack of support for their top-quality government, or boggle-eyed insecurity about another faith's ancient gods, the Taliban were also responsible for the total destruction of massive Sixth Century works of art representing the Buddha,[17] carved into the mountains of the Bamyan Valley. It was an act of cultural genocide, or the deliberate destruction of a group's heritage.[18] This event alone was enough to result in international solidarity of support when the U.S. offered to seek out and destroy the Taliban after 9/11, in retaliation for harboring Osama bin Laden.

During the Taliban's first rule of Afganistan, Shi'a Muslims (mainly ethnic Hazaras) were regularly persecuted.[19] During their 2021 battle against government forces In 2021 during their second rule, it was reported that the Taliban shot and tortured to death 9 Hazara civilians, a war crime.[20] In 2021 during the Taliban's second rule, they have systematically forced Hazaras from their homes,[21] which is ethnic cleansing.

Following the withdrawal of Western forces, the Taliban rapidly retook control of the country.

The interim government leadership of the Islamic Emirate of Afghanistan indicates that there will be no room for non-Taliban in the government, and that crackdowns on human rights will continue. The leadership includes members of the terrorist Haqqani network

, including several cabinet members who are on the United Nations sanctions list.[22] LGBTQ+ Afghanis are at risk of persecution, as they face an uncertain future under the new government.[23]

They then became involved in a civil war with ISKP

, a DAESH-linked group of Taliban defectors who thought that the Taliban weren't radical enough.