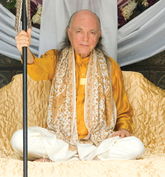 Adi Da, a few months before he died.
Not to be confused with Adidas

Adi Da (November 3, 1939–November 27, 2008) was a guru, mystic, cult leader and incomprehensible weird little guy from Queens, New York. He was born Franklin Albert Jones, and also known as Bubba Ho-Tep, Bubba Free John, Da Free John, Da Love-Ananda, Da Kalki, Da Avadhoota, Da Avabhasa, Adi Da Love-Ananda Samraj amongst other names. Apparently, he was a unique spiritual avatar, and you can only achieve enlightenment by following him and his Generic Eastern-ish Religion. He gained most of his fame as part of the counterculture movement in the 1970s and then fell into relative obscurity punctuated by lawsuits regarding false imprisonment, sexual abuse and assault of his followers.[1]

His teachings were almost exclusively "Divine Self-Revelation" with "no outside sources" — which is pretty clear code for PIDOOMA. Although he died in 2008 leaving an undetermined number of followers, you can still buy his DVDs for the neat and tidy sum of $26.95.

This cults-related article is a stub.
You can help RationalWiki by expanding it.
Retrieved from "https://rationalwiki.org/w/index.php?title=Adi_Da&oldid=2478060"
Categories:
Hidden categories: