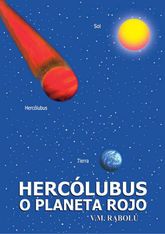 Hercólubus, in the Latin American woo scene, is a giant planet that supposedly will approach the Earth with catastrophic results, similar to the Nibiru/Planet X claims. This sounds like the plot to a bad science fiction story.

Its most recent promoter is the Colombian New Age author V.M. Rabolu (real name: Joaquin Enrique Amortegui Valbuena, 1926-2000). According to (a promotional video of) his book, Hercólubus o Planeta Rojo:[1]

More nonsense in the book include:

If you want to enjoy the BS by yourself, the book is sent for free. However you can *cough* find a copy *cough* in French *cough* if you *cough* look deep enough and at the bottom in *cough* Google.

The origin of the woo[edit]

Hercólubus or Red Planet was written in 1998/1999, but Rabolu apparently got the idea from his "teacher" Samael Aun Weor

, who in the 1970s preached about Hercólubus being the end of the world in religious terms, as a punishment for the "shameful humanity that deserves the karma that approaches" and that "did not want to listen to the voice of the prophets".[4] Being the founder of a theosophy/anthroposophy-influenced New Age "gnostic" church (read: cult, with many splits later), he also threw Atlantis and the Kali Yuga into the mix.[5] In his version, Hercólubus is a part of the "distant solar system of Tylo", which he identifies[5] as Barnard's Star.[note 5] Needless to say, despite his claims to the contrary, Hercólubus is not an accepted scientific fact.[note 6]

ZetaTalk quotes a Hercólubus prophecy to bolster its claims about "Planet X", though they cite another origin — the channeled prophecies of other South Americans.[6] In the Brazilian version, the planet is orbiting an invisible star called Tia and enters the Solar System every 6666 years.[6] Skeptical readers will note that an invisible star would be a black hole, making this claim all the more laughable.

In recent times, some of the 2012 nuts have outright conflated it with the already conflated pair PlanetX/Nibiru. It's not that they have a great choice of actions — it's either that, or claiming that there are multiple incoming planets. The latter may be too much to swallow even for the most gullible among their followers.