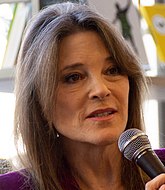 Marianne Deborah Williamson (1952–) is an American New Age self-help guru and author who worked for Oprah Winfrey.[1] She was one of the candidates for the 2020 Democratic primaries, though she has little political experience. Her previous run for office was in 2014, when she ran for the US House of Representatives, coming in 4th place.[2] Nevertheless, she did this because she believes that the United States needed a moral and spiritual awakening.[3] She joined the primary on January 29, 2019.[4] She gained a big following on Reddit by capitalizing on the meme culture surrounding it.[5] Initially, her Reddit subscribers totaled only 36, but it ballooned to around 2,400 after the Democrat debate. Additionally, after the debates, she became the top searched candidate on Google for two nights.[6] Though she holds several reasonable left-wing views, such as supporting Medicare for All,[7] DACA, the Green New Deal, taking climate change seriously, and tuition-free college, while also believing she could have countered Donald Trump's culture of fear with love, she also holds problematic views including anti-vaccine views and some New Age bullshit (some of which appear to bolster her anti-corporatist and anti-elite views).[8][9] She also had no clear policy plans, though she outlined some of her ideas on her campaign site.

Williamson started her New Age career by regurgitating the 1976 book of alleged channelings known as A Course in Miracles with her own commentary in A Return to Love.[10]

Williamson, like Trump, is a self-help guru, but Trump intends to help only himself. Trump's stated inspiration is from Norman Vincent Peale,

Williamson has offered tokens of incomprehensible wisdom and deepity in her Twitter posts.

Just beneath the surface, this isn't politics it's black magic. Entirely a psychic battle. Use your shield of Virtue and your sword of Truth.[14]

Everyone feels on some level like an alien in this world, because we ARE. We come from another realm of consciousness, and long for home.[15]

It doesn't help that she has spouted anti-vaccine tropes.

She has made quite a few odd references to pregnancy.[note 1]

Each of us is pregnant with a better version of ourselves.[17]

Yin is feminine, earth; yang is masculine, sky. When God is seen as He, the soul is seen as She. Just archetypes. Spirit impregnates soul.[18]

Imagine yourself pregnant with a better version of yourself. You spent long enough with the old you. You can download an upgrade. #fb[19]

A wisdom culture is emerging from the imaginal cells of a disintegrating individualistic society. We're pregnant with the possible world.[20]

Every soul on earth is pregnant now with a new possibility. Do you have the courage to face your fear and give it birth within yourself?[21]

Anti-vaccine views and other pseudoscientific views[edit]

Williamson, while not hard-core anti-vaccine, appears to be at least sympathetic to the anti-vaccine movement, a soft-core anti-vaxxer. Williamson believes that vaccine mandates are "Orwellian" and "draconian".[22] She has compared vaccine mandates to abortion, saying that the mandates interfere with what people want to do with their bodies. Appeal to personal choice is a common anti-vaccine refrain that neglects children's health, and, newsflash, measles don't care about principles of bodily autonomy. Furthermore, people in general, especially immunocompromised ones, don't really like having diseases spread to them.

She later walked back on those remarks, though she still does not take a strong stance against the movement by stating something along the lines of "I think vaccines save lives but concerns about drugs are valid because Big Pharma"[22] and believing that public safety has to be balanced with personal choice ("individual choice" again, is a common anti-vaccine buzz word and neglects those that don't have that luxury: children, people who were previously infected with measles and chicken pox and have to suffer long-term damage after the disease is gone, and immunocompromised people). She also, back in 2011, made a vague post in Facebook: "I understand the controversial aspects of vaccinations, and I share many of the concerns".[22] During a 2015 segment with Bill Maher, she said that she believes that the "skepticism" is healthy and that while vaccines do protect against measles, she is rather concerned about the "overload" of vaccines ("too many, too soon" gambit by anti-vaxxers) and how Big Pharma apparently covers up results of studies of vaccines they don't like.

Williamson doesn't like glyphosate, believing that it can cause cancer (no evidence has been shown to establish a link) and that it helps Monsanto.[23] This is despite Monsanto's patent for glyphosate having expired in 2000. And since she links to Center for Food Safety, a site that heavily promotes GMO labeling, we're predicting that her views on GMOs aren't really stellar either.