All the sheeps!
For the RationalWiki userbase, see Sheeple.
A sheep is a species of mammal, Ovis aries, that, like the goat, cattle, and yak, has been domesticated by humans for thousands of years. Sheep form the basis of enormous agricultural industries, Middle Eastern and European cuisines, and numerous, humiliating and demeaning metaphors. As revenge for the middle and last, sheep have secretly inspired humans to humiliate themselves by making, giving and wearing tacky, or otherwise extremely fashionably unattractive, and sometimes extremely itchy Christmas sweaters. 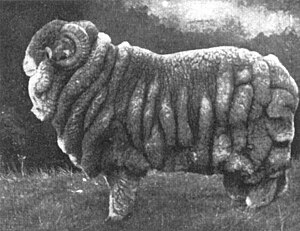 As with goats, cattle and other antelope, sheep feed on grass and other low-growing plants, and chew cud that is formed and regurgitated from predigested food shaped in a four-chambered stomach, or rumen, in a process called rumination.

Wild antelope living in cold or temperate climates shed their fur annually, during the warm seasons. Early on in their domestication, sheep have lost their ability to shed their fur, probably in conjunction with being bred for longer fur, forming the wool humans have used for weaving.

"Sheep" is often used as an epithet for people who are deemed "easily led" or "easily herded", as in "American sheeple", a vapid pejorative heard from both the unimaginative left and the unimaginative right. Condescending and hypocritical people often refer to everyone else as "sheep" when they themselves are just as ignorant and easily led,[1] especially when such condescending and hypocritical people use "sheep" or "sheeple" to insult those who do not blindly agree with them in the first place, i.e., that such people are the "sheep of their enemies," rather than being the insulter's obedient followers. The use of "sheep" as an epithet stems from Biblical and Christian metaphors using sheep to as a (more or less) positive reference to the ideal, obedient follower/worshiper. The definitive Lamb of God is of course Jesus Christ for His Sacrifice on a cross, at least in Christian theology.

Sheep are also easy prey for all large predators, including all subspecies of wolves other than those dogs trained to defend them. Sheeps bring out the predatory instinct in dogs of all sizes. Lambs are easy prey for birds of prey.

Despite the epithet, sheep are actually more intelligent than they appear,[2] such as recognizing human faces and being quite good learners; their flocking instinct are purely based on defense mechanisms. The epithet not only has lost all meaning, it has as much scientific accuracy as "memory of goldfish", in that it's not accurate, it's also cliché.

Despite the fact that humans have domesticated both goats and sheep, often keeping both in the same herds, for thousands of years, sheep-goat hybrids are so rare so as to be almost totally unheard of (as opposed to mules). In the vast majority of sheep-goat romances that survive beyond implantation of the egg, the result is a miscarriage. Documented sheep-goat hybrids tend to resemble sheep with long, goat-like legs. One male, born in Botswana, was infertile, but, even so, had a powerful libido, even by goat standards, mounting both ewes and nannies, even those not in heat, left and right until he was castrated at the ripe old age of 10 months.[3] Female sheep-goat hybrids are apparently fertile, as when bred with rams, at least, they (sometimes) produce live offspring.

The term "sheep-goat hybrid" is the official name for these animals, as the term "shoat" refers to a piglet or an immature pig, and the term "geep"[4][5] has already been grabbed to refer to a kind of biological chimera formed by ever-so delicately smushing together a fertilized sheep egg with a fertilized goat egg, then returning it to either a sheep's or a goat's uterus to implant and develop.