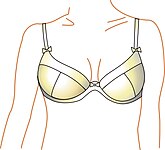 A bra, short for brassière

, from Old French braciere, an interior garniture placed within the armor to help the defense of arms (bras in modern French means "arms")[1] is underwear that provides support and comfort for breasts. In the West, a predecessor garment to the bra originated in the 16th century in the form of a corset.

The purposes of bras are the following:

Written by Sydney Ross Singer and Soma Grismaijer, the 1995 book Dressed To Kill: The Link Between Breast Cancer and Bras asserts the hypothesis that bras cause cancer. This conclusion was reached through a variety of unscientific methods.

After publishing Dressed to Kill, Singer and Grismaijer wrote Get It Off!, another crank book that talks about the dangers of wearing bras,[4] and a series of other pseudoscience books in which they claim that sleeping on a tilted bed can prevent Alzheimer's disease,[5] that frequent defecation and urination can prevent many conditions such as prostate enlargement and menopausal symptoms,[6] and that high blood pressure is a "major medical scam" because "blood pressure measurements can be whatever the doctor wants them to be." so they are irrelevant and made to fake illness by big pharma[7]

Other books such as The Prevention and Complementary Treatment of Breast Cancer (1996), by Dr. med. Michael Schacter (of the Schacter Center for Complimentary Medicine),[8] and The McDougall Program for a Healthy Heart (1996), by Mary and John A. McDougall, claim that bras block lymphatic drainage and therefore preventing toxins from leaving the body which therefore can lead to cancer.[9]

Their study was not conducted according to standard principles of epidemiological research and did not take into consideration other variables, including known risk factors for breast cancer.[9]

The authors' proposal that bras block the lymphatic system which leads to accumulated toxins and cancer was likewise contradicted by scientific study. The National Institutes of Health examined cancer rates among women who had their underarm lymph nodes removed as part of melanoma treatment: "The surgery, which is known to block lymph drainage from breast tissue, did not detectably increase breast cancer rates, the study found, meaning that it is extremely unlikely that wearing a bra, which affects lymph flow minimally if at all, would do so."[17] This is is wrong based on existing data, both for standard and underwire bras.[18][19] Of course, our favorite Gwyneth Paltrow promoted this myth and other pseudoscience as well.[20] Further research has confirmed that bras do not lead to cancer.[15]

Despite dating as far back as the ancient Romans,[22] the common belief that ptosis

(breasts sagging) can be prevented with bra use is not supported by any scientific evidence;[21][23] the only exception to this is sports bras.

Breast ptosis is a natural aging process[24] that is caused by a loss of skin elasticity, gravity, and intensive exercise; sports bras slow down ptosis because they reduce the stress and movement on breasts by limiting movement. 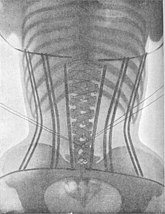 The corset: "Fashion Before Ease". Here is a X-ray of a person in a corset.

Bras are widely used in modern day with the belief of providing comfort and support; however, wearing a bra can be uncomfortable, can irritate the shoulder and back skin (shoulder straps and bra hooks on the back can rub against the skin), and cause shoulder pain.[26][27] Widespread bra usage is out of the false assumption of necessity because of social and advertising pressures.[28][29] Bras have no medical purpose whatsoever,[30] their sole purpose being comfort for the individual, and according to a study conducted by Jean-Denis Rouillon on three hundred woman, it's not even necessary for that:[28]

[W]omen who didn't wear bras eventually developed muscles in their chest to act as natural support. In the women who wore bras, the support they provided was found to actually PREVENT muscles like these from growing.

It's a common misconception that A, B, C, and D go from smallest breast size to biggest, according to two women that run the blog Big Cup Little Cup:[31]

And C? Well, that’s just on the larger side of average.

B? About a handful, small but just about right.

The bra burning feminist of the 70s is prevalent in pop culture; however, they don't really exist. The misconception was started in the late 60s by misleading newspapers.[33][34] The reality is, however, that women threw items, including bras, in a trash can.