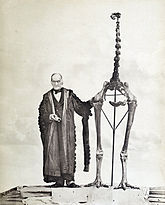 Sir Richard Owen (1804–1892) was an English anatomist who was the foremost expert on paleontology and comparative anatomy during his heyday, who also was an infamous opponent of Darwin's theories and hypotheses concerning evolution by natural selection. Owen is perhaps best remembered today for coining the term "dinosaur" to describe the clade of extinct reptilian beasts (except for birds, but don't expect creationists to tell you that).[1] Owen agreed with Darwin that evolution occurred, but he differed with Darwin over the details of how and why evolution occurred.[2]

This dispute with Darwin (and then, perhaps inevitably, Sir Thomas Henry Huxley, who was to become Owen's nemesis in his later years) ultimately led to the loss of Owen's credibility as a scientist, while also, in a way, foreshadowing the eventual rise of the "creation scientists".[notes 1]

Owen's contributions to the rising science of paleontology were vast, it would be decades before he would be superseded by paleontologists such as Edward Drinker Cope.[notes 2] One of the feathers in Owen's cap, besides the aforementioned naming of the dinosaurs as a taxonomic clade, was his 1863 description of the famous example of a transitional fossil Archaeopteryx specimen discovered in a German limestone deposit in 1861, two years prior. Owen, however, had a bias that resulted in him downplaying certain aspects of the transitional nature of Archaeopteryx, and he claimed that it was "just a mere bird." He then proceeded to instead sow discord among paleontologists by insinuating that birds evolved from pterosaurs rather than dinosaurs, allowing him to both distance himself from that absurd notion and then use the discord he had sewn as an example to heap scorn on evolutionary scientists' credibility.[3]

Owen was also the first to notice the resemblance certain newly discovered "reptiles" from South Africa held to mammals. He described and named these specimens, including Dicynodon. He dubbed them Amonodontia, which would eventually be recognized as a clade of therapsid

, or "mammal-like reptile." Over thirty years of study on them led to his 1875 tome Catalogue of the Fossil Reptilia of South Africa.[4] Owen also described a certain few extinct South American mammal genera, supplied by Darwin himself.[5]

Owen also was the one who recognized the now famous transitional fossil Basilosaurus as being a whale, rather than a reptile as Richard Harlan

originally described it as. Of course, Owen being Owen, he had to rename the taxon to an admittedly more fitting Zeuglodon (meaning "yoked tooth" in reference to Basilosaurus' rooted teeth, rather than having the atavistic undifferentiated conical teeth modern toothed whales have), but the rules of zoological nomenclature being what they are, the name given by Harlan was retained.[6]

Perhaps the thing that permanently did in Owen's career were his false allegations that humans and apes qualify as belonging to two separate subclasses of Mammalia, justifying this blatantly false assertion by claiming that "apes lack a fundamental structure of the brain that only humans possess, that is, the hippocampus minor." Even when Huxley famously called him out on his crap, Owen kept repeating this blatant lie anyways, which led the English satirist Charles Kingsley to famously lampoon this charade of Owen's with the following aside from his classic children's novel The Water Babies:

After Owen's death Huxley famously, and arrogantly, asserted that "hardly any of these speculations and determinations have stood the test of investigation, or, indeed, that any of them were ever widely accepted. I am not sure that anyone but the historian of anatomical science is ever likely to recur to them." Contrary to Huxley's overconfident bravado, Owen has been somewhat vindicated by the eyes of history, with his important work in paleontology and comparative anatomy providing much of substance to the development of evolutionary theory, even though Owen himself is probably turning over in his grave at the thought of it.[7]