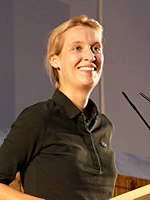 Her signature pose is grimacing while holding her arms in an awkward position.

Alice Weidel is the xenophobic[1], transphobic[2], Eurosceptic[3], hypocritical, and Islamophobic[3] token lesbian leader of the Nazi party's spiritual successor in Germany, Alternative for Germany. She used to be a banker for Goldman Sachs,[3] giving her a bit of actual credibility in the realm of economics but must have made the mistake of reading Mein Kampf and Ayn Rand's novels, falling into the rabbit hole of the far-right.[citation NOT needed] All jokes aside, she may actually have read something that convinced her to move to the right, though; her old colleagues and friends at Goldman Sachs have said that they are shocked at her transformation from banker to right-wing political leader. Apparently, she joined the party because of its opposition to the Euro.

This politicians-related article is a stub.
You can help RationalWiki by expanding it.
Retrieved from "https://rationalwiki.org/w/index.php?title=Alice_Weidel&oldid=2454862"
Categories:
Hidden category: