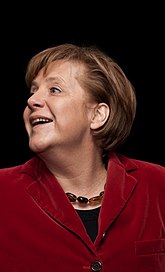 Angela Merkel (1954–) is the former Chancellor of Germany. Merkel obtained a doctorate in quantum chemistry in 1986[1] and worked as a research chemist until about 1989[2] when she entered politics.

With her in charge, the CDU has resisted the right-wing populist wave that has gripped so many other conservative parties. Hilariously, she has been widely criticized by members of the German and American right-wing and far-right (in a lovely example of "anything to the left of me is leftist") for her 2015 immigration policies[3] which state that Germany is an "open door" to refugees. She does not regret this choice.[4]

Unfortunately, while this has given refugees a safe place to live, it has also made Germany seemingly vulnerable to terrorism and Islamic fundamentalism, which is seen as one of the causes of the increase in membership of the predominant far-right party (Alternative für Deutschland) that is heavily anti-immigration – even if it's against their best interests [5] (ironically, rightwing terror attacks are more common in Germany than Islamist attacks,[6] as in the United States). She is considered a fundamental source of European direction and unity, especially in the face of the Brexit process.

She is an interesting sort in terms of her geopolitical positions, being probably the most vocal proponent for the European Union. Yet, despite that generally globalist stance, she has enacted domestic policies within Germany itself, such as support for a multi-ethnic Germany, assimilation, and increased national unity that could arguably classify her as a civic and cultural nationalist.

Until recently, she was widely admired for her support of human rights. Unfortunately, 2020 has shown her to be a great disappointment here, signing a major trade deal with China despite its already terrible human rights record[7] hitting rock bottom under Winnie the Pooh Xi Jinping [8]. Sorry, Uighurs and Hong Kong - Volkswagen sales are more important than you.

This politicians-related article is a stub.
You can help RationalWiki by expanding it.
Retrieved from "https://rationalwiki.org/w/index.php?title=Angela_Merkel&oldid=2459659"
Categories:
Hidden categories: