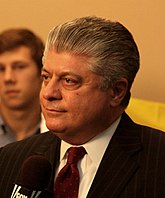 Napolitano made him an offer he couldn't refuse.

Judge Andrew Napolitano (1950–) is a former Judge of the New Jersey Superior Court and current libertarian pundit on that CNBC knock-off no one watches Fox Business Network who has a sweet Don Corleone coiffure. He is a major case of stopped clock syndrome. Ed Brayton has this to say about him:

Napolitano was also notable for being one of the few pundits on Fox openly supporting Wikileaks and not calling for Julian Assange's assassination. On the other hand, he's incredibly paranoid and has endorsed 9/11 conspiracy theories,[2] gold buggery,[3] deep state,[4] and Federal Reserve conspiracies.[5] Your mileage may vary.