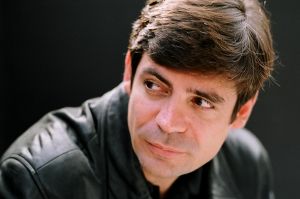 Ayyy! The Fonzi of Freedom is here to protect your gliberties.

Nick Gillespie (also known as The Fonzi of Freedom due to his habit of making all of his media appearances wearing a leather jacket) is the former editor-at-large and continuing contributor to the libertarian magazine Reason.

No limits on campaign contributions[edit]

Gillespie is so libertarian that he has even denounced attempts to set limits on campaign contributions, treating it like an excuse for more government regulations or in his words, to "increase restrictions on unambiguously political speech via campaign finance 'reform'".[1] Considering that Reason is bankrolled by the Koch brothers this is hardly surprising, though he also writes for The Daily Beast, which is nobody's idea of a laissez-faire rag.

Nick proved that he will go to any length to fight the dreaded socialism when he appeared alongside Jonah Goldberg and some other talking heads on a Glenn Beck documentary that was essentially a long argument by insinuation attempting to associate liberals with Hitler and Stalin.[2]

There was also some internet drama between Gillespie and Jon Chait of The New Republic when Chait called him out repeatedly for using pseudostatistics in a debate over taxes.[3] The fact that he doesn't fill up his blog with posts about how tall he is puts him a notch or two above McMegan.

This libertarian-related article is a stub.
You can help RationalWiki by expanding it.
Retrieved from "https://rationalwiki.org/w/index.php?title=Nick_Gillespie&oldid=2468416"
Categories:
Hidden categories: