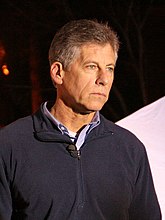 Fuhrman in 2008 "reporting" to Geraldo Rivera.

Mark Fuhrman (February 5, 1952–) is a former detective of the Los Angeles Police Department (LAPD). He is primarily known for his part in the investigation of the murders of Nicole Brown Simpson and Ronald Lyle Goldman and his subsequent felony conviction for perjury.

Nicole Brown Simpson and Ronald Lyle Goldman were murdered at Brown's Brentwood condominium during the night of June 12, 1994. Robert Riske and his partner were the first police officers on the scene in the early morning of June 13, and Riske found a bloody left-hand glove at the scene.[1] At least 14 officers who arrived on the scene before Fuhrman reported seeing only one glove.[2] Fuhrman and his superior, Ronald Phillips, were the first detectives to arrive; Fuhrman's partner, Brad Roberts, arrived later. Fuhrman was familiar with O. J. Simpson and Nicole Brown because of a 1985 domestic violence call. Fuhrman left Brown's condominium with Phillips and lead detectives Tom Lange and Philip Vannatter, and they went to the Simpson residence.[3]

At the Simpson residence, Fuhrman found a number of blood drops in and on a white Ford Bronco parked outside.[3] Fuhrman then climbed over the wall of the property in order to let the other detectives in. They later testified that they entered Simpson's estate without a search warrant due to exigent circumstances—specifically, concern that Simpson himself might have been harmed. In Simpson's guest house, detectives found Kato Kaelin, who told detectives that he had heard thumping sounds earlier in the night. An investigation of the property by Fuhrman produced a second bloody glove which was later determined to be the right-hand mate of the glove found at the murder scene.[4] The glove found on the Simpson estate, which — according to DNA testing — was soaked with the blood of both victims and was considered to be one of the strongest pieces of evidence for the prosecution.[5]

As part of their defense, O. J. Simpson's attorneys questioned Fuhrman about his alleged prior use of racist terms. During cross-examination, Fuhrman, when asked by defense attorney F. Lee Bailey whether he had used the word "nigger", said he hadn't used the word in 10 years.[6] However, the defense produced four witnesses to establish that Fuhrman had used the word more recently, as well as audiotapes contradicting his testimony. The "Fuhrman Tapes" contain forty-one examples of the use of the term to refer to black people in a racially-disrespectful context. These references were not casual slips of the tongue but a consistent pattern that recurs throughout the transcripts.[7] The tapes were dated between the years 1985 and 1994 as taped interviews given to Laura Hart McKinny, a writer working on a screenplay about female police officers. Fuhrman was working as a consultant for McKinny under the understanding that he would be paid $10,000 if a movie were produced.

Once Mark Fuhrman was outed as a racist by the defense team, he was widely condemned, even by the prosecution, and was accused of planting evidence which became a focal point of the trial and attracted enormous media attention that — for a time — eclipsed coverage of the crime itself, such that the father of Ron Goldman reminded the media, “This is not the Fuhrman trial... This is a trial about the man who murdered my son.” Ultimately, the jury was only allowed to hear two excerpts from the Fuhrman tapes which did not include the inflammatory violent content or material related to potential misconduct. Jurors heard Fuhrman say, "We have no niggers where I grew up," and, "That's where niggers live." With the jury absent on September 6, the defense asked Fuhrman whether he had ever falsified police reports or if he had planted or manufactured evidence in the Simpson case. Although he had earlier responded "no" when asked this question, this time he invoked his Fifth Amendment right against self-incrimination on his lawyer's advice. During his closing argument, defense attorney Johnnie Cochran referred to Fuhrman as "a lying, perjuring, genocidal racist" and analogized him to Hitler. He argued that Fuhrman had planted the bloody glove on O. J. Simpson's estate as part of a racially-motivated plot against Simpson which could be traced back to his first meeting with the interracial couple in 1985. Although there was no evidence to suggest that Fuhrman had planted the glove, his perjury regarding his use of the word "nigger" was widely seen as severely damaging the prosecution's credibility in front of the mostly black jury (especially in the wake of the Rodney King trial), and it has been cited as one of the key reasons that Simpson was acquitted. (To be fair to Fuhrman, Charles Manson prosecutor Vincent Bugliosi wrote in Outrage, his book of the Simpson trial, that since perjury requires an oath, intent, falsity, and materiality to the subject at hand, Fuhrman probably didn't even commit perjury, since, in his view, the question of whether Fuhrman had used racial epithets had absolutely nothing material to do with whether Simpson was guilty (much like lying about one's weight or height or diet in an embezzlement trial) and that perjury in some form occurs in virtually all court cases but is almost never prosecuted. For the sake of argument and brevity, we'll simply assume that Fuhrman's lie constitutes perjury.)

In 1996, a year after retiring from the LAPD, Mark Fuhrman pleaded no contest to perjury for his false testimony related to his use of racial epithets, although his record was later expunged. During 1997, he wrote a book about the Simpson case titled Murder in Brentwood. He has written other true crime books as well. Today, Fuhrman is a forensic and crime scene "expert" for Fox News,[8] and he has been a frequent guest of Fox commentator Sean Hannity and continues to serve up his own "expertise" on criminal justice, race, and police issues in America. He was also the host of the Mark Fuhrman Show on KGA-AM in Spokane, Washington.