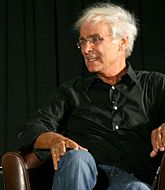 Mike Malloy (born 1942) is a liberal radio commentator, who rants about current events and politics. He is an atheist, liberal, and 9/11 conspiracy theory-promoter.[1]

He gained broad attention in 2004 when the fledgling Air America Radio put his show on after Janeane and Sam in the 9-12 PM EST slot. When Air America ditched him, he scrambled to keep his fine self on the air via the fledgling and now defunct NOVA M radio network. Currently, he and his fine young wife and producer, Kathy Bay, run the show out of his basement and he is featured on a handful of actual real radio stations.[2]

Prior to becoming a liberal talker, he was a news writer with CNN from 1984 to 1987, as well as an editor of the Atlanta newspaper Creative Loafing. He has studied English and political science at North Carolina State University, Ohio's University of Toledo, Georgia State University, and Florida's Jacksonville University.

Malloy has a massive hate-on for Glenn Beck,[3] stating during one of his tin-foil hat moments that he hopes Beck commits suicide on camera, which, Malloy opined, would become a very popular YouTube video.[4] The wingnut press had a field-day with this statement. Aside from Glenn Beck, he hates anything Republican in general, sometimes using the phrase "Have I mentioned yet tonight how much I hate these people?" when he is busy railing against them during moments of temporary (or at least we hope temporary) insanity.

An almost perfect description of Malloy's show would be as follows: an angry, "Get off my lawn!" type of old man grumbling for hours about how much he hates everything. Similar to his counterparts, he will willingly shout down and hang up on callers who don't believe exactly what he does (no matter how off the wall his beliefs at the time are). This aggressive, dark tone is fitting for the late, 9 p.m. to midnight (Eastern Time) time slot of the show. Bumper music usually consists of: rock music from the 1960s to 1990s, disco, country, and folk music, as well as some comedic novelty songs.

The angry old man has, however, had some high points. One was his serializing of 1984, which he read in seven-minute segments in its entirety on his show. Another was an accidental result of the call-in nature of the show. Just before Thanksgiving in 2008 a caller on the topic of the recession mentioned that she and her husband could not afford to visit their parents and children for the holiday, and another caller, a long haul trucker, got connected with them and met them at a truck stop and bought them the gas they needed.

As the only open atheist on American talk radio, Mike Malloy labels Wednesday shows as "Church Night" for extended commentary against religion.[5]

But mostly he just yells at the microphone, saying "Have I mentioned to you yet how much I hate these people?"