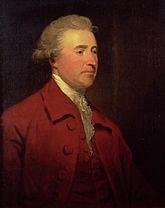 Edmund Burke, called the "father of conservatism," was a member of the Whigs

) is recognized as the opposition camp to "Conservatism", but in Europe, "Liberalism" (=Mainly classical liberalism or moderate economic liberalism) is perceived as a Conservative-friendly idea and is at odds with "Socialism"(=Mainly social democracy and democratic socialism) and social liberalism. In other words, in the case of 'liberal' conservatism in Europe, there is no link to 'liberal' in the American political context.

In the United States[edit]

Of course, there are socially moderate and (appropriately) fiscally conservative(=economic liberal) people in the United States. These will be mainly people like John McCain and Mitt Romney, who has a moderate tendency within conservatives. However, they are likely to deny that they are "liberal conservative" because they are not "liberal" in the American context. (Liberal conservatives support civil liberties based on classical liberalism.)

Since democratic socialism has never been a mainstream political force in the United States, people who actually support social democratic policies call themselves "liberal". Therefore, the term "liberal" used in the United States is a concept that cannot be applied in other countries. But we don't know the future. If Democratic Party become mainstream politicians who advocate "socialists" such as Bernie Sanders and AOC, the day may come when moderates in the Republican Party call themselves (anti-socialist and classical-)"liberals". In fact, it is used in this sense in Australia.

This politics-related article is a stub.
You can help RationalWiki by expanding it.
Retrieved from "https://rationalwiki.org/w/index.php?title=Liberal_conservatism&oldid=2459139"
Categories:
Hidden categories: