From RationalWiki
(Redirected from Anselm)
Jump to: navigation, search 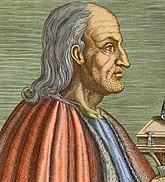 Anselm of Canterbury, being boring and dull.
Saint Anselm of Canterbury (1033–1109) was a medieval Italian-born Christian philosopher who first penned the famous ontological argument for the existence of God.[1] Anselm's argument depends on "God" being defined as "that than which no greater can be conceived" and on Saint Augustine's Great Chain of Being. He also developed the satisfaction theory of atonement, today taught in Roman Catholic, Lutheran, and Reformed churches, an alternative to the substitutionary atonement which is one of the Five Fundamentals of Fundamentalism.

From 1093, he also served as the Archbishop of Canterbury. In that role, he fought for the church's interests during the Investiture Controversy, over the issue of whether church or secular rulers should be able to appoint clergy.[2] For his opposition to the political goals of the English monarchy, he was exiled from England twice.

Among his several works, two of the most important and significant are Cur Deus Homo ("Why Did God Become Man?") and Proslogion ("Discourse"). In Cur Deus Homo, he explains and defends why Jesus Christ the Holy Savior must be both God and man in order to reconcile a holy God with sinful humanity. According to this theory, which is based upon the feudal structure of society, finite humanity has committed a sin against infinite God. In feudal society, an offender was required to make recompense, or satisfaction, to the one offended according to that person’s status. Thus, a crime against a king would require more satisfaction than a crime against a baron or a serf. According to this way of thinking, humanity, which could never make satisfaction to a God, could expect only eternal death. The instrument for bringing humans back into a right relationship with God, therefore, had to be a God-human (Christ), by whose infinite merits humanity is purified in an act of cooperative re-creation. This rejected the view that humanity, through its sin, owes a debt to the Devil to go to hell and placed the essence of redemption in individual union with Christ, to which the sacrament of baptism (by which a person is incorporated into the church) opens the way.[3]

In Proslogion, Anselm tackles the arguments for the existence of God[note 1] Anselm's argument (as noted in chapter 2) goes like this; God is "that than which a greater cannot be thought"; in other words, he is a being so great, so full of metaphysical powers, that one cannot so much as conceive of a being who would be greater than God, therefore, God is.[note 2]

A monk named Gaunilo of Marmoutiers