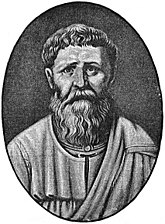 Augustine of Hippo (354–430 CE), otherwise known as St. Augustine, was the first great Christian philosopher or theologian.[citation needed] He was heavily influenced by Platonism, and wrote the extremely influential City of God Against the Pagans and the autobiographical Confessions, along with about a thousand other things.

It is often forgotten that Augustine was actually North African, specifically of Amazigh descent.

Augustine is ripe for quote mining on all sides, due at least in part to the vast amount he wrote. But some statements key to Rationalwiki's mission include:

It not infrequently happens that something about the earth, about the sky, about other elements of this world, about the motion and rotation or even the magnitude and distances of the stars, about definite eclipses of the sun and moon, about the passage of years and seasons, about the nature of animals, of fruits, of stones, and of other such things, may be known with the greatest certainty by reasoning or by experience, even by one who is not a Christian.

It is too disgraceful and ruinous, though, and greatly to be avoided, that he [the non-Christian] should hear a Christian speaking so idiotically on these matters, and as if in accord with Christian writings, that he might say that he could scarcely keep from laughing when he saw how totally in error they are.

In view of this and in keeping it in mind constantly while dealing with the book of Genesis, I have, insofar as I was able, explained in detail and set forth for consideration the meanings of obscure passages, taking care not to affirm rashly some one meaning to the prejudice of another and perhaps better explanation.[2]

So even a major Christian theologian saw that biblical literalism is ridiculous—which is understandable, since literalism, in the dogmatic form we know it today, was not really a feature of Christian theology until the Protestant Reformation.

Contrary to popular opinion, however, Augustine believed in the young earth. As he writes in Book 12, Chapter 10 of the City of God:

Let us, then, omit the conjectures of men who know not what they say, when they speak of the nature and origin of the human race. For some hold the same opinion regarding men that they hold regarding the world itself, that they have always been. Thus Apuleius says when he is describing our race, “Individually they are mortal, but collectively, and as a race, they are immortal.” And when they are asked, how, if the human race has always been, they vindicate the truth of their history, which narrates who were the inventors, and what they invented, and who first instituted the liberal studies and the other arts, and who first inhabited this or that region, and this or that island? they reply,537 that most, if not all lands, were so desolated at intervals by fire and flood, that men were greatly reduced in numbers, and from these, again, the population was restored to its former numbers, and that thus there was at intervals a new beginning made, and though those things which had been interrupted and checked by the severe devastations were only renewed, yet they seemed to be originated then; but that man could not exist at all save as produced by man. But they say what they think, not what they know.

They are deceived, too, by those highly mendacious documents which profess to give the history of many thousand years, though, reckoning by the sacred writings, we find that not 6000 years have yet passed. And, not to spend many words in exposing the baselessness of these documents, in which so many thousands of years are accounted for, nor in proving that their authorities are totally inadequate, let me cite only that letter which Alexander the Great wrote to his mother Olympias, giving her the narrative he had from an Egyptian priest, which he had extracted from their sacred archives, and which gave an account of kingdoms mentioned also by the Greek historians. In this letter of Alexander’s a term of upwards of 5000 years is assigned to the kingdom of Assyria; while in the Greek history only 1300 years are reckoned from the reign of Bel himself, whom both Greek and Egyptian agree in counting the first king of Assyria. Then to the empire of the Persians and Macedonians this Egyptian assigned more than 8000 years, counting to the time of Alexander, to whom he was speaking; while among the Greeks, 485 years are assigned to the Macedonians down to the death of Alexander, and to the Persians 233 years, reckoning to the termination of his conquests. Thus these give a much smaller number of years than the Egyptians; and indeed, though multiplied three times, the Greek chronology would still be shorter. For the Egyptians are said to have formerly reckoned only four months to their year; so that one year, according to the fuller and truer computation now in use among them as well as among ourselves, would comprehend three of their old years. But not even thus, as I said, does the Greek history correspond with the Egyptian in its chronology. And therefore the former must receive the greater credit, because it does not exceed the true account of the duration of the world as it is given by our documents, which are truly sacred. Further, if this letter of Alexander, which has become so famous, differs widely in this matter of chronology from the probable credible account, how much less can we believe these documents which, though full of fabulous and fictitious antiquities, they would fain oppose to the authority of our well-known and divine books, which predicted that the whole world would believe them, and which the whole world accordingly has believed; which proved, too, that it had truly narrated past events by its prediction of future events, which have so exactly come to pass![3]

In particular, he rejects the idea that the seven days were literal days, preferring instead to see them as a single instant, though he specifically rejects the contemporary non-Christian idea of deep time (in those days infinite time, over which the Earth and humanity had existed roughly unchanged). This underlies the acceptance of an old Earth by Catholics,[notes 1] Eastern Orthodox, and some Protestants.