Calvinism (also Reformed Theology) is a Protestant Christian theological system that arose in Switzerland during the sixteenth century as a part of the Protestant Reformation. It is named after the reformer, lawyer and theologian John Calvin and was created after he was exiled from France. Calvin's thought was deeply inspired by earlier reformers such as Martin Luther's reformation in what is now Germany.

. Calvinist thought teaches that fallen, post-Eden humanity is absolutely depraved and utterly incapable of personally ending its rebellion against God, and is thus doomed to be punished for eternity after death. The redemptive qualities of Jesus Christ's execution and the benevolent, predetermined will of God are the absolute and only interventions that provide happiness in the afterlife. This preordained gift of salvation from God is either impossible to refuse (if so chosen) or impossible to obtain (if not chosen). Catholics traditionally believe that the life you lead and the works you do while alive on Earth (along with adhering to the basic articles of the Christian faith) determine your soul's fate.

Reformed theology also differs from Catholicism in the same ways most other Protestant denominations differ: the practice of mass, the veneration of saints, soteriology, views on transubstantiation and church hierarchy.

The foundational tenet of Reformed epistemology

is that Yahweh is similar to an axiom. He can be inferred naturally, without the need of support from other fundamental truths.

Calvinism has been very influential in the development of many Protestant churches, including churches of the English Separatist and Dissenter movements (Pilgrims and Puritans). Many fundamentalist churches adhere to Calvinistic or Reformed Theologies. Among mainstream American denominations, Presbyterianism is most closely associated with Reformed Theology, although only smaller groups (like the Associate Reformed Presbyterian Church

Despite there being dozens of Calvinist denominations in the US alone, there are two basic groups within Calvinism and Reformed Theology.[1]

Contemporary (or Liberal/Modernist/Progressive) churches adhere to the general principles of Reformed Theology, but have liberal aspects, such as the ordination of women or tolerance of evolution. This includes the older Presbyterian churches such as the Presbyterian Church (USA)

, the Reformed Church in America

, and the Christian Reformed Churches

, Congregationalists, and the United Church of Christ.

There are also much more conservative Calvinists. This includes most Reformed Baptists, such as some Southern Baptists, Congregationalists, various churches in the Continuing Anglican movement

, the Presbyterian Church in America

,[Note 1] and the Orthodox Presbyterian Church

Churches that follow Calvinism very closely usually follow set standards known as Confessions. Such churches are referred to as confessional, and will tend to believe, advocate, and teach everything taught in confessions.

Calvin on his deathbed wondering if he should've stayed a Catholic

Significant differences between early Protestant movements and Roman Catholicism included their respective views on free will and on original sin, and their soteriologies

(theologies of salvation). Disputation reached a high point ca. 1525 when Luther published De servo arbitrio (On the Bondage of the Will

) in contrast to Desiderius Erasmus's arguments in favor of free will, arguing that the effects of original sin had so thoroughly ensnared the human will that it could not voluntarily choose to serve God.

, in Luther's view, lay in the idea that man could choose to become perfect through human works

Calvin was heavily influenced by the works of the African philosopher Augustine (354-430) and of many other theologians before him, and had a good understanding of the Early Church Fathers

Other parts of Calvin's theology, such as his views on iconoclasm, stemmed from the doctrines of Huldrych Zwingli (1484-1531). 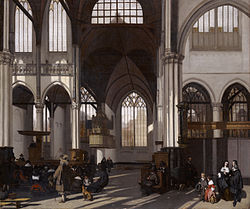 Interior of a Calvinist church in Amsterdam.

Calvin was a highly prolific writer, who wrote many books, letters, commentaries, and sermons. Much of Calvin's original doctrine can best be described as a young earth creationist, Biblical literalist view of the bible. Most of his thought can be found in either a 1500-page book translated from Latin, known as the "Institutes of the Christian Religion." Also among his works include a 2000 page "Commentary of Genesis", and similar commentaries on most parts of the Bible.

Much of what Calvin believed lives on in various confessions, such as the The Westminster Confession of Faith.[2]

Despite this fact, Calvin is best known for what is known as Predestination.

Put simply, predestination states that Christians were chosen by God, for no apparent reason[3], and cannot be un-chosen for any reason.[4] This is based of off the idea that people are so sinful that they do not want anything to do with God, and that given a choice would not rationally choose to become christians in the first place. Predestination makes it pointless to be a Calvinist or even believe in predestination. If you're already saved, it doesn't matter what you believe, and if you're not already saved, it still doesn't matter what you believe. If you're saved, you can sin all you want, and if you're not saved, you can actually still sin all you want. That said, the majority of Calvinists reply that "a tree is known by its fruits": if a so-called Calvinist is still willingly and knowingly sinning, that means that their belief is merely hypocrisy and will only serve to damn them further. According to them, the truly saved might not be able to resist all temptation but they would never deliberately abuse the grace they have received.

It goes without saying no one is born with a sign that marks him/her among the chosen ones, so it's of course considered believers will get lucky.

The Fall of Man: why we're all screwed.

Being of Dutch origin, the mnemonic is called T.U.L.I.P.

The fringe of the fringe[edit]

What this means in practical terms is all us filthy pagans, heathens, atheists, Jews, non-Calvinist christians, and other unrepentant sinners were predestined by God to be this way, and can never be saved.

Fred Phelps and the Westboro Baptist Church was known to subscribe to a particularly whacked variant of the Hyper-Calvinist belief system.[5] Phelps not only believed that filthy reprobates are predestined for hell, but also that God actively hates them and brings about their untimely deaths. He identified as a Primitive Baptist, but other Primitive Baptists rejected any association with him.

Another Calvinist that has risen to more recent prominence among this loon squad is Harold Camping, the mastermind behind the (horribly failed) May 21, 2011 Doomsday date phenomenon. His "predictions" instigated fringe Calvinists with little knowledge to go on a mad conversion spree, trying desperately to find God's "elect" before the Judgement Day that never came. The Christian churches in his surroundings generally reject him as a heretic for violation of the no-future-predictions-please rule, that relies on some sayings attributed to Jesus himself.

There is another type of "hyper" Calvinism, in the sense of going beyond Calvinism, and that is the view represented by the Primitive Baptist Universalists

, also known as "No-Hellers". They believe (like other Calvinists) that man has no ability to resist grace, but they also teach that God is also all-loving, and therefore all will be saved no matter what they do. Like other Hyper-Calvinists, they refrain from personal evangelism. The bluegrass musician Ralph Stanley was a "No-Heller" and their unique hymn style influenced his music. British historian, Simon Schama

described in his experience of an Appalachian No-Heller service in The American Future: A History.[6]

Calvinism has a presence on the internet, mostly found in the form of online forums and Youtube. One such site is aptly called the Puritanboard, and is devoted to people studying and becoming Puritans. It is choked full of people posting under the avatar of their favorite Puritan, and often features dainty writing and neo-Confederate sentiment.[7]

Calvinism is closely related to homeschooling,[Note 2] the quiverfull movement, and the occasional geocentrism.[8]

There are literally hundreds of videos on YouTube where Calvinists debate Arminians (a similar sect to Calvinism that differs in a few key points, chiefly on the role that free will plays in salvation and whether or not the elect can become apostates—the Wesleyan branch of Methodism is one of its modern forms), carrying on a tradition that has existed as long as Calvinism and Arminianism themselves.[9] Debates of this variety will eventually turn emotional, and result in hour long rants.