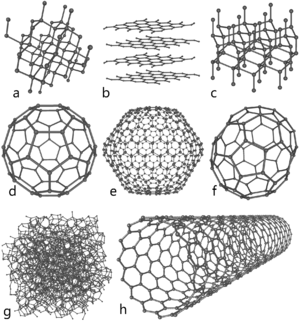 Carbon is an element with six protons, six neutrons (in the most common isotope) and six electrons, four of which are valence electrons.

Carbon can bond in many configurations. Although it forms stronger bonds with fluorine and oxygen than with itself, carbon-carbon bonds are so stable that the two best-defined forms of elemental carbon are resistant to chemical attack and remain solid at very high temperatures.

The reason carbon bonds so readily and in such variety is that its valence electron shell is half full.[note 1] As such, carbon is very happy to share electrons with almost any reasonably friendly nearby atom.

Pure carbon forms several different compounds in different ways. Diamond is a three dimensional lattice that, due to its stable bonds, is very hard. Very, very hard. And pretty when cut well. Graphite forms 2-dimensional sheets that are very loosely bonded to each other, making it very slippery. Synthetic buckyballs are footballs (soccer balls to you Yanks) formed of 60 carbon atoms; buckytubes are similar but form long hollow fibers.

The study of how carbon interacts with other elements is called "organic chemistry".

Hydrocarbons are a convenient way to store chemical energy for later use via oxidation.

This chemistry-related article is a stub.
You can help RationalWiki by expanding it.
Retrieved from "https://rationalwiki.org/w/index.php?title=Carbon&oldid=2439670"
Categories:
Hidden categories: