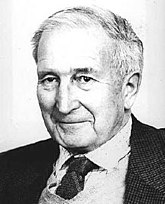 Flew! What a scorcher!

Antony Garrad Newton Flew (1923–2010) was a British philosopher who was a prominent advocate of atheism until very late in his life.

Antony Flew is remarkable in being one of a vanishingly small number of intellectuals who have moved from a position of atheism to the support of the existence of some kind of "god".

He coined the phrase "No True Scotsman" to describe a particular kind of fallacy.

He argued in his 1976 book The Presumption of Atheism that we should presuppose that God does not exist until proof to the contrary was found - in other words, that the burden of proof lies with the theists. Notwithstanding his later opinions this was an opinion he held all his life.[1] He also argued for atheism from the 'problem of evil' i.e. the existence of evil contradicts a compassionate, all-powerful god.

At the age of 81 he repudiated atheism in favour of a type of deism largely because of some form of God of the gaps argument applied to the origin of the universe and the origin of life, and an argument from incredulity applied to evolution. Using these arguments he apparently felt the burden of proof had been met.

Darwin saw that there was a problem with the origin of life," he says. "It had to begin with a creature capable of producing creatures that are not always identical to their parents. It is simply out of the question that the first living matter evolved out of dead matter and then developed into an extraordinary, complicated creature of which we have no examples. There must have been some intelligence.[2]

Flew's politics were on the right wing of the British Conservative Party, while taking a libertarian view on some issues. He was vice president of the Conservative Monday Club, a grouping of right-wing Tories who opposed British decolonisation in Africa and who generally shared Powellite sympathies. He was also vice president of the Western Goals Institute, which was founded as an anti-communist organisation but was closely linked with support for apartheid in South Africa, supporting the South African Conservative Party after they broke from the ruling National Party when the latter began to dismantle the country's racist system.[4]